NORTHERN IRELAND TOURIST BOARD PICKS UP HAT TRICK OF AWARDS 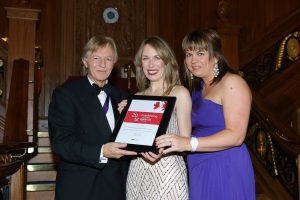 Charles Fulton from CIM with Eimear Callaghan from NITB and Carmel Scott from AV Browne.

NORTHERN Ireland Tourist Board has picked up a hat-trick of awards for its recent ‘ni2012 Our Time Our Place’ campaign.

And they also won the bronze awards for Tourism and Hospitality (public sector category) and Social Economy Businesses, Charities and other not-for-profit including public sector (large organisation category).

The gala dinner took place at Titanic Belfast and was attended by over 350 people, awarding companies from across Northern Ireland and the Republic of Ireland for excellence in marketing campaigns over the last 12 months.

The CIM awards for NITB come on the back of recent recognition at the Northern Ireland Travel and Tourism Awards for its ni2012 campaign.

And the Northern Ireland Hotels Federation President’s Annual Gala Dinner where Chief Executive Alan Clarke was awarded the accolade of ‘Hospitality Hero 2012’ for his contribution to Northern Ireland’s tourism industry over the past 10 years.

NITB’s Director of Marketing and Events, Susie McCullough, was delighted to receive the three awards on behalf of all colleagues and staff at NITB.

“It’s an honour to be awarded gold by the CIM for best brand development of the ni2012 campaign and also be recognised in two additional categories for marketing excellence,” said Susie.

“From the opening of Titanic Belfast and the Giants Causeway visitor centre to the hosting of major events including the Irish Open at Royal Portrush, Peace Camp, Land of Giants and BBC proms on the Titanic slipways and many more, the ni2012 campaign has firmly established Northern Ireland on the global tourism stage and the momentum is certainly going to continue next year with the year-long Derry~Londonderry UK City of Culture celebrations and the World Police and Fire,” she added.

AV Browne’s Account Director for NITB, Carmel Scott, said: “AV Browne is delighted to have worked with NITB on the‘ni2012 Our Time Our Place’ brand and subsequent communications campaign.

“The awards are testament to the dedication and hard work by NITB to promote Northern Ireland as a world class tourism destination.

“We look forward to moving into 2013 and having continued success in our joint marketing efforts,” she added.