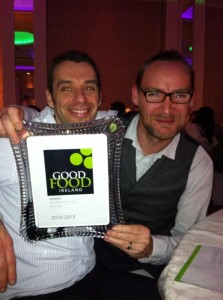 A CHEF who has served up mouth watering dishes for the Queen has got another feather in his cap.

The gong was handed out this week in a ceremony in Dublin where the best restaurants north and south of the border competed against each other.

Said Danny Millar: “I am absolutely delight. Well done to the team at Balloo House.”

The prestigious Good Food Ireland Awards 2012 were held on Tuesday night in Dublin and the guest speaker was Taoiseach Enda Kenny.

Danny Millar joined Balloo House in 2006 and has become one of Ireland’s best known chefs .

He was named ‘Best Chef in Ireland’ at the prestigious Restaurant Association of Ireland awards in 2010.

Having trained in Germany and in Michelin starred restaurants in Ireland, Danny has developed a cooking style that he describes as a modern take on European classics, with a firm emphasis on local and seasonal produce.

His style of cooking has won him praise from highly respected food writers, with inclusion in the Michelin Guide, the Bridgestone 100 Best Restaurants in Ireland and Georgina Campbell’s ‘Best of the Best’ in Ireland Guide.

Danny has also made regular appearances on BBC 1 cooking show ‘Saturday Kitchen’ and from the popular series ‘Great British Menu’, where he was the winner of the Northern Ireland region for two consecutive years.

So popular is his cooking that a number of his recipes have also appeared in magazines and newspapers throughout the UK and Ireland.

Ambassador of the Year: Ed Cooney, The Merrion Hotel, Dublin;

Producer of the Year: The Foods of Athenry, Galway;

“Come and See” Producer of the Year: The Apple Farm, Cahir, Co Tipperary;