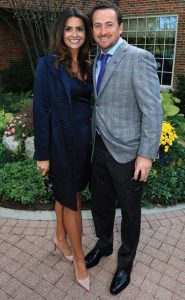 Grame and Kristine get engaged

THEY may be rivals on the professional golfing circuit but off the field they are the best of friends.

And today Holywood’s Rory McIlroy was one of the first to congratulate Graeme McDowell on his engagement to gorgeous girlfriend Kristine Stape.

On hearing of ‘G-MAC’S’ nuptual plans, Rory tweeted: “Congrats to my good friend on his engagement to the lovely.

“Delighted for both of you.”

McDowell, from Portrush, has admitted it was a heart pounding moment when he proposed to his American girlfriend.

And he picked a spectacular location to pop the question.

He dropped down on one knee on the 700ft-high helideck at the Burj Al Arab Hotel in Dubai to ask her the biggest question of his life.

And his heart stopped pounding when she said ‘yes’.

“I did it properly, getting down on one knee,” revealed the former US Open winner.

“She had no idea what was going on and was shocked and stunned. I even found myself getting a little bit emotional.

“It was a very special location, looking out over Dubai,” added McDowell, saying the happy couple, both 33, “probably will get married at the end of next year”.

McDowell first met his fiancee, a top interior designer in her native Florida, when he hired her company to work on the new four-bedroom house he’s built on the exclusive Lake Nona golf estate in Orlando.

“So now she’ll be moving into the house she’s designed,” he said.

“Hopefully she’s built a house she likes because it’ll cost me a lot of money if we have to change it,” McDowell added with a smile. “But I don’t see that happening.

“Kristin’s a great girl and both my family and hers are delighted with the news.”

Having enjoyed dinner in the renowned Al Muntaha Restaurant at the top of the Burj Al Arab during a tournament in Dubai last year, McDowell suggested they should go again.

“So I booked a table and, when we arrived, I told her a contact at the hotel was going to give us a quick look around, which included going out on the helipad,” he said.

“I have to say I was very nervous popping the question. I’d a little speech all prepared to make to her and found myself getting all choked up,” McDowell admitted. “But she was just in total shock.”

McDowell has been told theirs was the first proposal on the famous helipad.

Tiger Woods and Rory McIlroy have driven balls off the pad, while Roger Federer and Andre Agassi even played tennis on it.

McDowell, who finished in the top 10 last week in his first event since his engagement, the Talisker Aussie Masters, is back in Dubai this week hoping to win the €6.2m DP World Tour Championship – now that would go a long way towards the wedding costs.