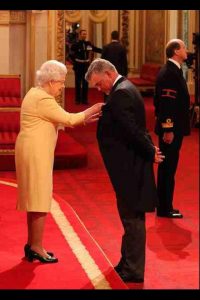 FORMER British Open Champion Darren Clarke teed up at Buckingham Palace today to receive his OBE from the Queen.

He was named in the Queen’s New Year’s honours list for his golfing success in 2011.

Darren, who got married to former model Alison Campbell, said that the OBE was a “massive honour”.

The 43-year-old won his first major at Royal St George’s in Kent in July 2011. He has played in four Ryder Cup-winning teams and was a victorious vice-captain in 2010.

US Open champion McIlroy received an MBE for services to sport.

Clarke was vice captain in the European Ryder Cup team who recently beat America in their own back yard.