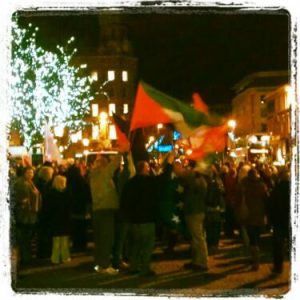 Pro-Palestinian rally this evening in Belfast

The rally, which started at 7pm in front of Belfast City Hall, came as intense efforts were going on to broke a ceasefire between warring Israelis and Palestinians.

Up to 550 turned up and among those who has attended was Sinn Fein’s West Belfast MP Paul Maskey.

He had earlier urged people to come out and show their support for the Palestinians.

Police were yesterday alerted because of loyalist fury at the planned pro Gaza protest.

Loyalists were planning a counter demonstration at the City Hall which had been organised on Facebook.

Social networking sites claim the pro-Palestinian protest is “Shinners in another coat”, a reference to Sinn Fein’s support for the Palestinian cause.

One single mum who turned up to show support for the Israeli forces blasted the loyalists. “They are nothing but part-time computer generals.

“They should be out here protesting on behalf of the Israeli people not at home playing with their computers.” 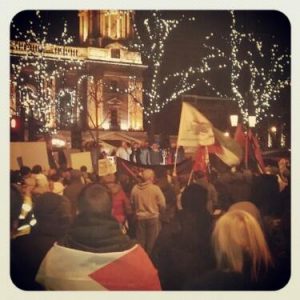 While republicans support the Palestinians, loyalists have strong support for Israel and its attacks on the Gaza strip.

A similar impromptu protest was held at the City Hall last Thurday and it passed off peacefully.

But as the conflict in the Middle East increases, there is growing support along Northern Ireland’s divided political lines for both the Palestinians and Israelis. 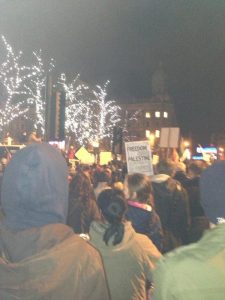 Hamas deliberately targets our children and they deliberately place their rockets next to their children. Now despite this reality – and it’s a difficult reality – Israel will continue to do everything in its power to avoid civilian casualties.”