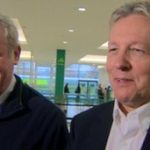 A TRADE mission to China has thrown up “dozens of leads” for Northern Ireland businesses to follow up, the First Minister has revealed.

Peter Robinson and Martin McGuinness are heading up a posse of 35 firms looking for new business while on a six-day visit to Shanghai and Hong Kong.

The aim of the trip is to promote trade, investment, tourism, and encourage research partnerships.

Mr Robinson said the exhibitions had been “very successful”.

“All of the companies that we have been speaking to have had considerable interest and have had literally dozens of leads that they have to follow up on when they go back,” he said.

Martini McGuinness said it was “hugely important” that political leaders engaged with an “ever-changing situation in China”.

He said there were “increasing opportunities” for Northern Ireland businesses to improve their exports.

“I think there has been widespread acclaim from the business sector for our decision to come here and give them support,” Mr McGuinness added.

“The first minister and myself are pledged to come back here in the spring of next year to engage with political leaders.

“It is hugely important that we take up these invitations from what is undoubtedly going to be the most powerful economy in the world by 2015/16.”