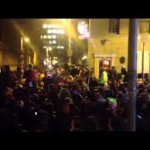 Vigil in Galway for Savita Halappanavar

A PROTEST and candle light vigil are to be held later today at Belfast City Hall for a woman who died in Galway.

Savita Halappanavar, who was 17 weeks pregnant, died of blood poisoning after suffering a miscarriage.

The 31-year-old’s husband claims she complained of agonising pain to hospital staff before she died by septicaemia in the early hours of Sunday 28 October.

A spokesperson for Alliance for Choice said: “We owe it to Savita and her family to make sure no other woman dies.

“Her husband, Praveen has asked for action to ensure she is the last woman who dies because of uncertain laws.

“It’s an issue North of the border also as the Assembly has failed to publish Guidance to doctors here, despite having been instructed by the High Court to do so in 2004.”

A further protest will be held at Gildhall Square in Londonderry tomorrow.

It comes after some 2,000 people protested outside Leinster House in Dublin on Wednesday night against abortion laws in the Republic of Ireland.

A candlelight vigil was held in Cork for dentist Ms Halappanavar, while a group of protesters rallied outside the Irish embassy in London.

An investigation has been launched into the death, which has reignited the debate on both sides of the border as to when a termination can be carried out.

Health Minister Edwin Poots said he fully intends to publish guidelines on terminations but they need to be robust enough to withstand any legal challenge.

She said: “The lack of guidelines for medical staff means there is a lot of confusion and a lot of uncertainty over what is allowed and what is not allowed.”

Savita Halappanavar went to Galway University Hospital on 21 October complaining of back pain. After routine tests the young mother-to-be was told everything was fine and was sent home.

When she returned later that day, doctors found she was miscarrying.

Praveen Halappanavar told The Irish Times his wife asked for a medical termination several times over a three-day period.

Although she was in severe pain at the time, her husband said her requests were denied because a foetal heartbeat was still present.

Mr Halappanavar claimed they were told: “This is a Catholic country.”

His wife was later transferred to intensive care as her condition deteriorated.

She died of septicaemia in the early hours of 28 October – a week after she first visited the hospital.

Mrs Halappanavar’s death is being investigated by the Galway-Roscommon University Hospitals Group and the state’s health officials and it is expected to be completed within three months.

The hospital said in a statement: “It is standard practice to review unexpected deaths in line with the HSE’s national incident management policy.”

A spokesman expressed sympathy to the family and friends of Mrs Halappanavar and said it is normal for medics to tell the coroner and Health Service Executive about the death, as well as completing a maternal death notification.