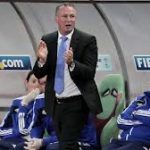 A night of frustration for Northern Ireland manager Michael O’Neill

NORTHERN Ireland’s hopes of reaching the World Cup finals in Rio almost lie in tatters – despite rescuing a point at the death against minnows Azerbaijan.

David Healy scored his first international goal in four years with a 96th minute free-kick to secure a 1-1 draw at Windsor Park in World Cup qualifying Group F after Rauf Aliyev had given Berti Vogts’ side a shock lead.

Azerbaijan had lost 43 of their previous 46 international away games, but  Aliyev stunned the home side by scoring the opening goal of the game with a stunning 30-yarder after just five minutes.

He collected Javid Huseynov’s pass before hitting a superb left-foot curler into the bottom corner past a stunned Roy Carroll.

And just before the break Daniel Lafferty missed glorious chances when he headed Shane Ferguson’s stunning left-wing cross over the crossbar.

Chris Baird was guilty of missing a couple more glorious chances after the interval.

But deep into stoppage time substitute Healy was the hero when he slammed home his 36th international goal with a free-kick from the edge of the box to the relief of the home faithful.

The Bury man averted what would have been an embarrassing defeat although the result leaves Northern Ireland with three points from four games and all but out of the reckoning.

The point is unlikely to be enough to rescue Northern Ireland’s slim qualifying hopes but it did save Michael O’Neill’s side from one of their most ignominious defeats.

“It was a very frustrating night and one of those games where it didn’t seem to go for us,” said manager Michael O’Neill.

“From the moment they scored we dominated and should have won.”

O’Neill also revealed that Azerbaijan manager Berti Vogts apologised to him for the “behaviour of his players” after time-wasting during the game.

He added: “The number of times the trainer came on to the field – I feel the referee should have handled that better.”

Northern Ireland, who are nine points behind Group F leaders Russia, wasted at least six excellent opportunities before record scorer David Healy equalised from a free-kick in the sixth minute of injury-time.

The winless run is now 11 games, while O’Neill is without a victory in his seven games at the helm.

“To be fair the players went to the 96th minute and David popped up with an equaliser,” said O’Neill.

“We just have to keep doing what we’re doing, keep believing in the players and working with them.

“It’s not what we hoped for, to be dropping points at home to two of the weaker nations, but we’ve shown we can pick up points away from home.

“I’m not conscious of pressure – I’ll continue doing the job the way I’ve been doing it.”