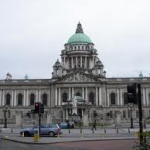 BELFAST has become the first city north or south of the border and the third ever in the UK to be selected to receive a prestigious IBM Smarter Cities Challenge grant.

The grant provides Belfast City Council with access in 2013 to some of IBM’s top experts to analyse and recommend ways the city can become an even better place in which to live and work.

As part of the programme, which is IBM’s largest philanthropic initiative, a team of six top  IBM experts is assigned to each winning city to study a key issue identified by the city’s leadership.

The team’s three-week pro bono consulting engagement, valued at US$400,000, involves working with city officials to analyse data, and solicit the input of dozens of local agencies and advocacy groups.

IBM then provides detailed recommendations for how the city might efficiently and effectively address the issue.

“Belfast City Council distinguished itself among its peers by convincingly demonstrating its preparation and willingness to make the kind of improvements that will improve its residents’ quality of life and become a smarter city,” said Stanley S Litow, IBM vice president of corporate citizenship & corporate affairs, and president of IBM’s Foundation.

“We consider it a privilege to share with Belfast the talent and expertise of our most gifted employees, who are the envy of the industry.

“They have premier skills in a range of disciplines — all useful for helping to build smarter cities and a smarter planet.”

These included engagements in: Cheongju, Korea, where smarter transportation strategies were recommended; Dortmund, Germany, and Malaga Spain, where plans for economic, workforce, skills development were formulated; Jacksonville, USA, where steps for downtown revitalisation were outlined; Louisville, USA, where IBM showed how the city could use data to identify, predict and mitigate conditions that trigger asthma; Nairobi, Kenya, where a plan for traffic management was created; Geraldton, Australia, where ways for the city to become a leader in smart grid technology adoption and digital services were suggested; and Curitaba, Brazil, where IBM suggested approaches to sustainability and citizen engagement.