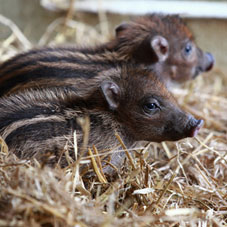 The pair were born on Saturday, October 12 and are said to be doing fine.

Parents, Malcolm and Mabel, arrived in Belfast in 2010 and Belfast Zoo is one of only four zoos in the UK to look after this species.

Zoo manager Mark Challis said: “We first bred Visayan warty pigs in 2011 and we are delighted that this success has continued with the recent birth of our twins.

“Visayan warty pigs are the most critically endangered of all wild pigs. They were once native to six islands in the Philippines but are now extinct on four of these.

“In fact, approximately 95% of this pigs’ natural habitat has been cleared away by local farmers who cut down the forest for farm use. It is therefore imperative that zoos play an active role in the conservation of this amazing species.”