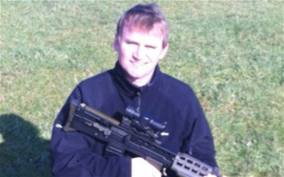 THIS is the Northern Ireland born Royal Marine submariner who is facing jail for collecting top secret material for Russian spys.

Devenney, from Strabane, Co Tyrone, also pleaded guilty to a charge of misconduct in a public office after arranging to meet two people he thought were from the Russian secret service.

He was arrested in Plymouth in March.

Devenney was charged under the Official Secrets Act for collecting information for a purpose “prejudicial to the safety or interests of the state” between 18 November 2011 and 7 March 2012.

He denied a second charge under the act of communicating information to another person. This will not be pursued by prosecutors as no secret information was passed on.

He admitted arranging to meet the people he thought were Russian agents to discuss information related to the movement of nuclear submarines.

The PO will be sentenced on 12 December at the Old Bailey, when parts of the hearing will be held in secret.

The judge, Mr Justice Saunders, told Devenney he would remain in custody until his sentencing.

Despite his work on board nuclear subs Devenney was a prolific user of Twitter, describing him as a ‘Labour supporter. Lover of ducks and chickens. Trainee Feminist!’

At times he was tweeting up to 40 times a day on a wide range of subjects including the domestic and international politics and his duties on board HMS Trafalgar.

In January he posted the message: “Bomb Iran? Am not bothered, but I’ll probably be in the Submarine that fires the missiles.”

The following month he wrote: “Cameron is putting his political pride before the best interests of the Service.”

When the Prime Minister visited HMS Vigilant in Scotland, Devenney tweeted: “Cameron visited my submarine today but I wasn’t there. Wish I was to give him a piece of my mind.”

Devenney had been enjoying a promising career in the Navy and was being allowed time to study for a degree in electronic engineering.

He had been due to begin the process of qualifying to become a commissioned officer, but it is thought his place was lost due to budget cuts.

Appearing at the Old Bailey he admitted a charge of collecting information for a purpose prejudicial to the safety or interests of the State, namely cyrpto-material, calculated to be or intended to be useful to the enemy.

The Official Secrets Act charge was collecting information for a purpose prejudicial to the safety or interests of the State between November 18 last year and March 7 this year.

He gathered details of “crypto material” – programmes used to encrypt secret information – which could be useful to an enemy.

Devenney denied a second count of communicating information to another person and this will not be pursued by prosecutors.

He was arrested at his barracks known as HMS Drake in Plymouth in March.