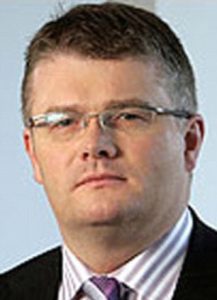 THE head of BBC Northern Ireland is in the firing line today after it was revealed he approved the ‘shoddy’ Newsnight programme which falsley accused Tory peer Lord McAlpine of being a child abuser.

Belfast Daily can report that director Peter Johnston was the senior BBC executive who gave the green light to run the report because the corporation was “running out of people” from its management to approve it.

This is because many of them, including head  of news Helen Boaden and director general George Entwistle, had removed  themselves from decision making in Savile-related stories following controversy  about their roles.

It is thought that various members of the BBC’s management board were given overall responsibility for material linked to the TV star and broader child-abuse claims.

Mr Johnston’s decision will now be investigated as part of a second probe into BBC2 Newsnights was making wrong editorial decisions.

An insider told the Daily Mail: “There were all these people doing things they would not normally do.’”

Mr Johnston, 47, who worked in marketing for Shell and as a management consultant at Coopers and Lybrand, has very little  journalistic experience.

He joined BBC Northern Ireland in 1994 initially working in audience research before becoming head of marketing and development in the province.

He was made controller and later director of BBC Northern Ireland in 2006.

A BBC source said: “At the heart of it, what  we have had on news is a complete muddle of responsibility and reporting  lines.’

Another source said: ‘They were running out of people really.

”It was his [Mr Johnston’s] right to have  intervened. He chose not to.’’

The inquiry will seek to find out if Mr Johnston sought the advice of his senior editorial colleagues in Belfast about the Newsnight programme before it was aired.

Mr Johnston’s unexpected involvement in the programme came as acting director-general Tim Davie, 45, has been handed a report into Newsnight’s botched investigation that wrongly linked a senior  politician to child abuse allegations in North Wales.

Up to six senior staff members could be jettisoned in the wake of director general George Entwistle’s sudden departure  over the November 2 programme.

Mr Davie, who has no journalistic experience, now finds himself running the world’s best-known broadcaster even though he did not make the final round of interviews when he applied to be director general  this year.

His first task will be to assess the report  by BBC Scotland’s Ken MacQuarrie into how the Newsnight investigation went so  terribly wrong.

Last night BBC Trust chairman Lord Patten warned that the two current internal inquiries – one on the dropped Jimmy Savile  report and the other on North Wales – ‘may involve people’s jobs as  well’.

But there are growing fears among senior  staff that the corporation is ‘rudderless’ and there is a power vacuum at the  top of the organisation.

Newsnight editor Peter Rippon last month ‘stepped aside’ as the corporation probed the bloody aftermath of the decision  to drop an investigation last year into the Savile claims.

And acting editor Liz Gibbons faced tough  questioning by the MacQuarrie inquiry which is looking into how the film resulted in Tory peer Lord McAlpine being wrongly branded a paedophile.

Lord McAlpine’s lawyers are now preparing to sue the BBC and other media outlets for running the story that led to him being wrongly named on the internet. 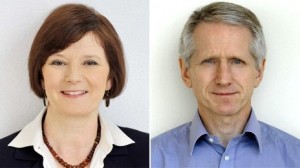 Helen Boaden and her deputy asked to ‘step aside’

This morning, BBC director of news Helen Boaden and her deputy Steve Mitchell have been asked to “step aside” pending the outcome of an internal review into the handling of the Jimmy Savile claims.

It follows a report into a separate Newsnight broadcast on abuse claims, which said the BBC must resolve a “lack of clarity” in the chain of command.

The director general quit over the broadcast with a £450,000 pay-off.

Downing Street said it was “hard to justify” such a sum.

Sources told the BBC that Prime Minister David Cameron believes it was a matter for George Entwistle’s conscience as to whether he expected the full payoff – a year’s salary after just two months in the job.