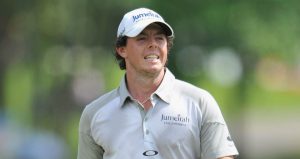 RORY McIlroy was a very happy man today after winning the Harry Vardon trophy and reaching the top of the European Tour’s money list for the first time.

A 30-foot eagle putt on the final green at the Barclays Singapore Open made the 23-year-old world No 1 the  youngest money list winner since Scot Sandy Lyle  in 1980.

But it was only when 19-year-old Italian Matteo Manassero also eagled the same hole more than two hours later that McIlroy could crack open the champagne.

Already with the PGA Tour title in the bag, McIlroy emulated the double achieved by Luke Donald last season when Manassero beat South African Louis Oosthuizen with a 12-foot putt at the third play-off hole.

If Oosthuizen had won he could still have caught McIlroy, but instead Manassero became the first player to win three times on the circuit before the age of 20. Not even Seve Ballesteros managed that.

McIlroy stormed through to third place with a closing six-under-par 65. “It really is hugely satisfying to finally become the European number one, especially after finishing second two of the last three years,” he said.

“Winning a second major championship already made it a fabulous season, but then to follow Luke Donald in becoming number one in both Europe and the States is the icing on the cake after a fabulous season.

“I set myself a number of ambitious goals at the start of the year, and to have ticked so many of the boxes feels great.

“It has always been one of my goals ever since securing my Tour card five years ago, but then to also end the year as both European and PGA Tour number one is just amazing.

“I feel so proud and humbled to join so many fabulous names in Europe who have won the Order of Merit.

“To be able to accomplish this goal with still two events remaining means that I can head to my UBS Hong Kong Open defence and the DP World Championship Dubai without that added pressure and just really enjoy my golf.

“A lot of hard work went into this and I am really proud of what I’ve achieved in 2012. I would like to give special thanks to the team around me for all the support they have given me throughout the year.