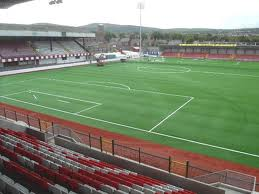 ALL roads lead to Solitude today for Belfast’s ‘Clash of the Titans’.

Several thousand Linfield will descend on north Belfast for the city’s very own Old Firm derby.

Cliftonville versus Linfield is a mouthwatering fixture in the Irish League in any season.

But today’s has a little bit more spice, if it needed any going by the history books.

The Reds top the table on the 30 points after 14 games while their arch rivals Linfield are nine points behind in sixth place.

The Blues got off to a poor start but in recent weeks have found their shooting boots and on Monday night they thrashed Ballymena Utd 6-0 in the IRN-BRU league cup.

Today, the Linfield team will be wearing their Poppy shirts ahead of tomorrow’s sombre Remembrance Sunday services across the province.

It will be a packed house at Solitude and it is definitely a must win game for blues manager David Jeffrey if he is to stay in contention with high flying Reds.

So tasty is the fixture that BBC Sportsound with Michael McNamee and for Reds manager Marty Quinn comes live from Solitude while the commentator for the big game is Joel Taggart and guest Chris Morgan, a former Linfield striker.

Red defender Steven Douglas is still out as awaits the surgeon’s knife on his knee.

Jeffrey knows his must perform if they are to keep climbing the table, saying: “Cliftonville are nine points ahead of us and the pressure is on my players.”

The Reds drew 1-1 last Saturday at the Oval against seventh placed Glentoran and a win today would keep them on top and boost their points tally to 33.

In form striker Liam Boyce, who was this voted October Player of the Month by the Northern Ireland Football Writers Association, know what his team has to do today against the Blues.

NICE ONE BOYCEY: Liam named Octobrer Player of the Month

He says: “We just want to keep our scoring record going.

“You can never rule Linfield out. Now they have got a bit of confidence, you never know how many games in a row they can win.”