Flintoff gets put through his paces by Barry McGuigan

FORMER England cricketer Andrew ‘Freddie’ Flintoff was bowled over by his stay in Belfast this week.

He was in the city to train ahead of his first professional fight against two-fight novice from the USA.

Richard Dawson,  a 23-year-old heavyweight from Oklahoma, remains undefeated but has fought just five rounds in total since his first bout  in February.

The American’s promoters expect to receive the contract within the next 24 hours ahead of the fight on November 30 at the Manchester Arena.

And as part of his celebrations, Flintoff made a surprise trip to Belfast, the home to many first class boxers from across the peaceline.

Holy Trinity Boxing club was taken aback when the former Ashes winning bowler turned up after he heard Belfast was the best place to train.

“I’m being trained by Barry and Shane McGuigan and he tells me the best place for training is over in Belfast,” said Flintoff.

“We have been at Holy Trinity, we have been training at Monkstown as well and are getting some invaluable experience from the best places going in to my first professional bout.”

Belfast has been in the spotlight following the Olympic success of boxers Paddy Barnes and Michael Conlan, who each won bronze in London.

Barry McGuigan said Flintoff has been working hard and has got in “tremendous” shape.

“He has been training very, very hard over the last three and a half months with my son Shane as his coach and I am the mentor and he has dropped 45 pounds in weight,” he said.

“He has got himself in to tremendous physical shape. He has never worked so hard in his life. He has never taken on any challenge that has been as tough as this.” 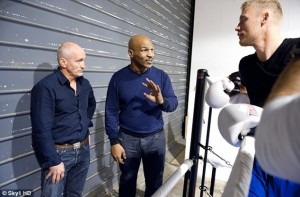 Flintoff has also had a pep talk from another former world champion Mike Tyson and, with his intensive training programme underway, he’s confident he’ll be ready for the fight in Manchester Arena on 30 November.

“And I will come back to Belfast,” he added. “I have met some great people.

“People over here have been so embracing, they have looked after us, they have helped us and I can’t speak highly enough of people and hopefully these are friendships I will take on for the rest of my life and keep coming back.”

Dawson’s first opponent Jimmy Lane  retired  on his stool after the first of four scheduled rounds before he  was declared  the unanimous winner against Jamell Williams in August.  Both boxers were  deducted points for holding in what was a dull contest  which should give  Flintoff hope.

The former England cricket captain  announced  in September that he would be trained by Irish boxing legend  Barry McGuigan and  his son Shane and his since lost over three stone in  weight during a gruelling  regime.

The 34-year-old was granted a licence by the  British Boxing Board of Control but has come in for some fierce  criticism,  particularly from promoter Frank Maloney who claimed Flintoff will ‘shame the  fight game’.

Flintoff, meanwhile, had a pep talk from  former heavyweight champion Mike Tyson, who paid a visit to his gym.

‘It was amazing to meet Tyson because as a  kid he was one of my heroes,’ Flintoff said. ‘So to have him come  down to the  gym – not only that, but to talk to me about it all was  amazing.

‘He spoke a lot about the emotion of  boxing  and it was all relevant to how I was feeling. So to hear it from  Mike Tyson  made me realise it was okay for me to feel like that too.

‘He talked a lot about what he went through  pre-fight and in the run up to a fight; the emotional states he was in and the  nerves he experienced  before he fought.

‘He  is obviously one of the best boxers  ever, so hearing what he had to say  gave me a lot of inspiration. I went on the  pads in the front of him  which was a pretty surreal  experience.

‘I have really taken his comments on  board and I’ve just got my head down and am working hard to make small  improvements  each and every day.’


One Response to THANK YOU VERY MUCH MR MCGUIGAN, SAYS FORMER CRICKETER FLINTOFF AHEAD OF FIRST PRO FIGHT