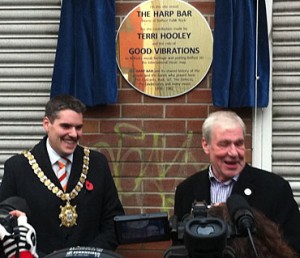 Lord Mayor Gavin Robinson unveiled a special plaque on the site of the former Harp Bar, celebrating the role which both Terri Hooley himself and his Good Vibrations record label have played in the musical life of the city.

This is one of the very rare times a plaque commemorating the achievements of a living person has been unveiled in the city.

A similar plaque marks the childhood home of Van Morrison in Hyndman Street in east Belfast.

Said Lord Mayor Gavin Robinson: “The contribution made by Terri Hooley to the music scene, here in Belfast in particular and across Northern Ireland as a whole, is written large in the history of our city and across the world.

“He is a remarkable man who came out of difficult times in Belfast.

“In the 1970s he set up a record shop in the city when many other people were going out of business:  he provided an open and welcoming space when much of Belfast was closing down.

“He was a living example of how to survive beyond sectarianism and mistrust.

“Then Terri discovered a new generation of bands in the town who were inspired by the ideals of punk rock.

“They wanted a fresh start, they had alternative ways of thinking and they created their own sense of community.  Terri, a child of the Sixties, understood the value of this.

“Through his record label, `Good Vibrations` – named after his shop, of course – Terri released many great records, perhaps the most famous being `Teenage Kicks`, which was recorded at Wizard Studios, just a few yards away from here.

“In doing so, he encouraged young people to feel useful and empowered, and that is one of Terri`s most important legacies.

“We are now standing at the site of the old Harp Bar, a venue that Terri helped to organize as a home for the young bands.

“The small stage upstairs was a home for acts like Rudi and The Outcasts, Stiff Little Fingers, The Undertones and The Defects.

“In time, Belfast became celebrated for the positive and creative energy that came out of here. And Terri played an important role in telling that other, important story.

“Many generations of bands from Northern Ireland owe something to Terri`s example.

“While he may have come into conflict with previous generations of city fathers, it is genuinely a great pleasure to stand here with Terri and many of his friends and to recognize his work.

“This plaque may be a small gesture, but hopefully it will serve both as a reminder of the light which both the man and the venue shone in some of our darkest days and an inspiration for people, now and in the future, to explore and experience our rich and living musical heritage further,” added the Lord Mayor.

This Sunday, a special event celebrating Terri Hooley`s life in music will mark the end of Belfast Music Week.

Taking place at the Oh Yeah Music Centre, it will feature performances from The Defects, Protex and other special guests, as well as a screening of edited highlights from `Good Vibrations`, the recent biopic about Terri and the Belfast punk scene, and a DJ set from the man himself.