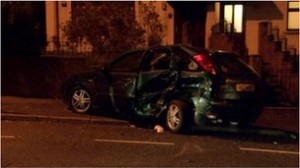 TWO men are to face a court this morning over a hijacking and a spate of robberies earlir this week.

Both are charged with aggravated vehicle taking and causing injury.

One of the men, aged 28, is charged with a further 16 offences, including robbery, grievous bodily harm with intent and hijacking.

The two men, agecd 18 and 28,  are to appear before Belfast Magistrates Court.

The suspects one carrying a knife, approached two women in the Station Street area of east Belfast shortly before 7.30pm on Monday night.