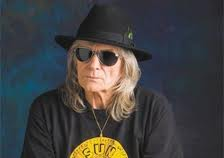 RUMOURS of his demise are greatly exaggerated.

And today, BBC NI had to apologise for saying one of the province’s leading guitarists had suddenly passed away.

The shock announcement by BBC NI of the death of Henry McCullough led to a feeding frenzy on Twitter.

It sparked a series of tweets among fans all expressing their deepest symapthy to the McCullough family on his sudden passing.

Even the new editor of the News Letter Rankin Armstrong took the BBC at their word and tweeted the message onto his Twitter followers.

However, by lunch time it emerged that Henry McCullough was not in fact dead at all.

It prompted BBC NI to remove the offending tweet, adding: “Apologies for the earlier incorrect tweet reporting the death of Wings guitarist Henry McCullough which we have no deleted.”

And former senior BBC NI editor Keith Baker, who has fond memories of the guitarist playing, later tweeted: “Henry McCullough story is an example to us all about jumping the gun on twitter.”

However, his sister has just told Radio Ulster host Wendy Austin that the Portstewart-born guitarist is alive but seriously ill.

Said Rae Morrison: “He is a very special person.

“We really are very worried for him, his sister is on her way home from Florida and his brother is coming home from Glasgow.”

McCullough is one of the most famous guitarists in the world, performing with a host of legendary artists.

He was invited by the Beatle Paul McCartney to join Wings in the 1970s and spent 18 months touring with them.

Mr McCullough, who is 69, was also a member of Joe Cocker’s band.

He played with Cocker at the legendary Woodstock concert in 1969, the only Irishman to perform there.

McCullough spent 18 months touring and recording with Wings in the 1970s, after being invited to join the band following a number of jamming sessions with McCartney.

He has been hailed for his guitar work on the US number one hit My Love.

McCullough later signed to the Dark Horse record label of another Beatle, George Harrison, for his solo album Mind Your Own Business.