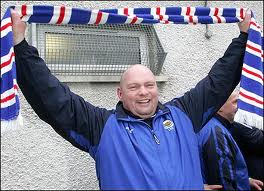 Davy Jeffrey all smiles as his team beat Ballymena 6-0

It’s a rare win for the Lurgan Blue and it was a cup shockeer for Eddie Patterson’s Glentoran who have been misfiring this season in the league.

However, Linfield are on a roll and last night they put six past Ballymena Utd, managed by former Blue stalwarts Glenn Ferguson and Lee Doherty.

Peter Thompson headed the opener on 20 minutes and Johnny Black fired in the second 10 minutes later.

Michael Carvill made it 3-0 from Mark McAllister’s lay-off and Brian McCaul tapped in the fourth before heading another goal just before half-time.

“In some matches this season we have been guilty of missing chances, but they went in tonight,” said Linfield manager David Jeffrey.

“Ballymena were very good in the first 15 minutes and it took us a while to get into the match.

“But when Peter Thompson got the first goal you could see the confidence flowing through the side.”