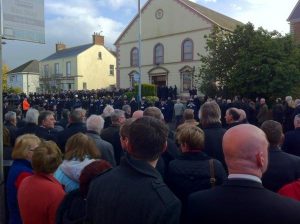 MOURNERS have started to gather in Cookstown for the lunchtime funeral of murdered prison officer David Black.

Colleagues of the 52-year-old have arrived dressed in full Prison Service uniform to pay their respects.

Police have been combined the cortege route with sniffer dogs for fear dissident republicans have left hoax or real devices.

The Co Tyrone town will come to a stand at 1pm as Mr Black’s remains are carried into Molesworth Street Presbyterian Church.

Sinn Fein chief Martin McGuinness has been told to stay away from today’s funeral of murdered prison officer David Black.

The deputy first minist had been planning to attend the lunchtime service in Cookstown to show solidarity with the Black family.

However, a message from the family to the Sinn Fein MLA made it clear neither he nor any representative of Sinn Fein were welcome at the funeral.

The NI Assembly will suspend work between 12.30pm and 4pm to allow MLA’s to attend the funeral.

Several thousand people are expected to attend, including prison officers and hundreds of Orangemen.

Mr Black was shot dead on the M1 in County Armagh on Thursday in a dissident republican ambush as he drove to work at Maghaberry Prison.

The 52-year-old was the first prison officer to be murdered in Northern Ireland in almost 20 years.

A private service at his family home in Cookstown will be followed by a funeral at 1pm at Molesworth Presbyterian Church in the town.

The interment, which is private, will take place at Kildress Parish Church.

A Sinn Fein source told the BBC that Deputy First Minister Martin McGuinness had been very willing to go to Mr Black’s family home in Cookstown and to attend the funeral.

However, he had been told the Black family did not wish to have any Sinn Fein representatives there.

At the same time, a vigil will be held at Belfast City Hall at 1pm organised by the Irish Congress of Trade Unions.

It will allow workers to show their abhorrence at the murder.

ICTU official Eugene McGlone: “People want to show that this murder is not being done in their name.”