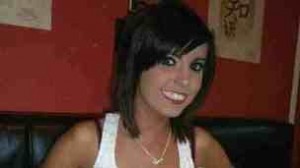 THIS IS  pretty Katherin Kelley who tragically died after a single car accident which has left two pals still in hosptial.

The 21-year-old, from the Portadown area, died in hospital yesterday despite valiant efforts of doctors to save her life.

Three men and two women, aged between 18 and 21, were in the car during the accident on the Armagh Road early on Saturday morning.

Police said a single vehicle was involved in the accident.

A 19-year-old woman and 18-year-old man are still being treated in hospital.