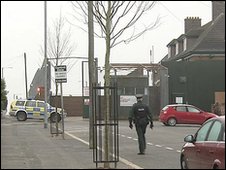 Oldpark PSNI where a woman clalmed she was ‘raped’

A MARRIED PSNI officer is facing the sack over allegations he repeatedly had sex with a woman in a Belfast police station.

And in return for his gun-toting sneeky sex romps, the police constable promised to get her son off on criminal charges.

The ‘sangar banger’ sex allegations have been at the centre of a Police Ombudsman’s probe for the past 20 months.

Now a file on the case has finally gone to the PSNI’s Professional Standards Department which deals with internal discipline against serving officers.

The will eventually end up on the desk of deputy chief constable Judith Gillespie who was once based at Oldpark station in the early 1980s.

The deptuy chief constable is likely to chair the disciplinary hearing at Lisnasharragh ‘Petty Sessions’ in east Belfast into the officer’s conduct while on duty.

A number of his senior officers may also face disciplinary action for not reporting the serious allegations to PSD.

The allegations emerged almost 20 months ago when a female community worker contacted a former RUC officer looking for advice.

The former policeman has spoken to Belfast Daily on the agreement that we do not reveal his identity for security reasons.

He told us: “It was a Sunday night in March 2011 and I was contacted on my mobile by a female community community worker.

“She was in a bit of a state and was asking at first could I put her in touch with the Police Ombudsman.

“She asked could she come to my home and I agreed to meet with her within 10 minutes. She arrived a short time later but at first was hesitant to say anything other than it concerned police and one officer in particular.”

The former RUC officer said he asked the woman what the nature of her complaint was.

“She told me that this unnamed officer had told other officers that he had been having sexual encounters with her and that they had made fun of her at certain community meetings in relation to this.

“She went on to say that this had come about because she had been having full sexual intercourse with this officer and that it was taking place at Oldpark PSNI Station which had been been decommissioned but still manned by one officer and a security guard at night.

“She further claimed that this sex was not of her own choosing as the police officer was suggesting that if she would comply he could help her son who was at this time in trouble with Police.”

The ex-RUC man said he stopped the woman and told her: “Do your realise the serious nature of what you’re saying?”

He addded: “At this point she burst into tears. I told her that this was in fact sex whilst under duress making it quite simply a case of rape.

“She agreed and asked for my help to put a stop to this. I again asked for the officers name as I couldn’t go forward unless she told me and this she eventually did.”

He said the following day he contacted the PSNI officer’s senior commander at Tennent Street police station and told him of the woman’s allegations.

“I knew the senior police officer who had worked s a community officer in the A District area. I told him the full story and he said he would get back to me after he put the allegation to the officer in question.”

The former RUC officer said the senior commander contacted him the following day on his mobile phone.

“His senior said to me that the officer started to cry and admitted to the allegations and confirmed that it was indeed the case.

“I asked his senior where do we go from here and he asked that he let him deal with it and talk to his chief which I took to be the district commander of A District.

“I agreed that I would leave it in his hands for the time being.

“The next day I received a call from another senior PSNI who informed me that he had been brought into it simply because he used to be this officer’s commander at one time.

“His exact words to me were: ‘Jesus, this is rape we are talking here’. I took that to mean that after 24 hours they were of the opinion that the policeman was admitting to the full allegation and not to merely to having consensual sex with this female.

“I replied: ‘Rape was your words not mine but yes I totally agree’.

“I asked him had Professional Standards Department been informed and he told me they had considered it but as yet hadn’t done so but that the chief had been involved in the discussion.”

He said he heard nothing from the PSNI about the allegations and three weeks later he received a text from his son who was at a school in north Belfast.

“Dad, you are never going to guess who is taking us in class?” read his son’s text message.

“I asked: ‘Who?’ My son text back saying: ‘The same policeman from Oldpark station and he is teaching us about sexual perversion on the internet and what to watch out for’.

“He confirmed the names and I then told him that one of those officers had a large question mark hanging over him in relation to a sexual allegation of rape.

“When I asked who had tasked him to the school for these duties I was absolutely astonished it was the same senior officer that I had made the initial report to.

“The deputy headmaster immediately told me he would call me back and in a short time and this he did stating that he had removed the officers from the school and had contacted the commander with a view to discuss the matter.

“He called me later after he spoke to this commander and said he had been told  by him that there were no on going issues in relation to any disciplinary actions of that nature against the officer in question.

“I made several attempts to contact the commander and emails were sent to him requesting a call back this never happened.  Within a week or so I was able to get him to answer his phone at Tennant street station and asked why he hadn’t received my requests.

“At this he admitted ignoring the requests and became quite aggressive telling me that I knew why and after pressing him on this he stated it’s the way you handled this case and that there was not a senior psni officer in the force that would even speak to me never mind meet me.

At this point I reminded him that I was no longer a police officer but a civilian doing his lawful duty and expected more from him and that I couldn’t believe he had indeed covered up the entire affair.

“I then contacted PONI and give a spent six hours with investigators making a statement,  including text messages from the woman who was central to the whole affair.

“I told the investigators that these sexual encounters took place whilst the officer was on duty protecting the station along with a private security guard. ”