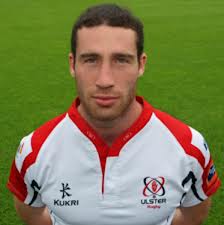 The full-back’s inclusion is one of nine changes in an Ulster side missing 10 players on Ireland duty.

Stephen Ferris, Craig Gilroy and Paul Marshall were released from the Irish training camp and they are in the line-up to face the Scottish visitors.

Edinburgh, on a run of six consecutive defeats, give centre James King, his first start of the season.

With Scotland stand-off Greig Laidlaw unavailable, Sean Cox assumes the captaincy for Michael Bradley’s struggling team and will start on the blind-side of a new-look back-row, with open-side Roddy Grant and Stuart McInally.

Prop Allan Jacobsen continues his recovery from a hamstring injury on the bench and is joined by new arrival Izak van der Westhuizen.

Nigel Brady will captain Ulster as the league leaders aim for nine wins from nine matches this season.

With Andrew earning his second cap at full-back, Jared Payne has switched to outside centre, a position he occupied on a regular basis for his previous club Auckland Blues.

Chris Cochrane will make his fourth appearance for Ulster after being named on the right wing, with Gilroy on the left flank.

The half back pairing of Paul Marshall and Ruan Pienaar remains unchanged from the 46-19 win over the Dragons, while Paddy Wallace will start alongside Payne in midfield.

Brady skippers the team from hooker in an all new front row which includes Callum Black and John Afoa.

Lewis Stevenson retains his place in the second row and is joined in the engine room by Neil McComb.

Ferris returns from a back injury to take his place at blindside flanker, with Mike McComish and Roger Wilson coming in at openside flanker and number 8 respectively.

Ulster coach Mark Anscombe has named a relatively inexperienced bench, which includes development prop Ricky Lutton, who will earn his first ever cap if he is used against the Scots.

Pienaar will leave to join up with the Springbok squad for their autumn internationals following Friday night’s fixture.

Ulster top the Pro12 table with six straight wins while Edinburgh languish in ninth place, with 13 points from their seven games.

Edinburgh lost out to the Scarlets by a single point last weekend and Bradley is asking his fringe players to step up on Friday.

“Because of the changes imposed on both Ulster and Edinburgh by availability, the game is up for grabs for whichever 15 players takes hold of it,” he said.

“It’s a great challenge for us. We’ve had a disappointing run of late and have spoken about how great a place it would be to end that run, so we’re approaching the game in a very positive frame of mind.

“Ravenhill has become a bit of a fortress so it’s a daunting task. They will be well supported and are on an unbeaten run but, from our point of view, we’re desperate to get a win, we’ve trained well this week and are very focused and driven to do a job.”