THE SILENT KILLER: NI NEW HOMES TO BE FITTED WITH GAS ALARMS

IT IS CALLED the silent killer, an odourless gas that claim lives without warning.

Now from today, Northern Ireland has become the firts part of the UK to make it compulsory for all new build homes to be fitted with a carbon monoxide alarm.

The new law comes as research suggests half of the UK population mistakenly believe their household smoke alarms will alert them to the gas.

The law follows the deaths of two teenagers from carbon monoxide poisoning in August 2010.

Neil McFerran and Aaron Davidson died after a gas leak in a holiday apartment in Castlerock, County Londonderry.

The two young men, who were 18 years old, had been staying at the apartment near Coleraine with a third friend, Matthew Gaw, who survived. The three friends were found by relatives.

Their families have welcomed the news but said it only reaches about 5% of properties. They have called for more to be done.

“I think it’s a great forward step, but this is only going to be new buildings, they still could go further,” Aaron Davidson’s mother Katrina said.

“We still need to push awareness of carbon monoxide, that it is a killer.”

The new law also requires that an alarm be fitted whenever a boiler or solid fuel stove is upgraded or replaced. 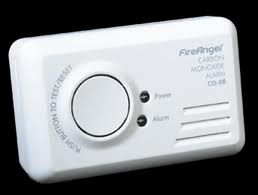 A survey carried out by the Carbon Monoxide – Be Alarmed! campaign states that only 39% of people have a carbon monoxide alarm.

It also suggests that half of the UK population mistakenly believed their smoke alarm would alert them to carbon monoxide gas.

The research was carried out in September among 3,458 UK adults. It said 81% of those surveyed know that carbon monoxide can kill.

Carbon Monoxide – Be Alarmed! is the national campaign to reduce the number of deaths and injuries caused by carbon monoxide.

The campaign is run by Energy UK on behalf of Britain’s six major gas and electricity companies, in partnership with the Dominic Rodgers Trust.

From today, October 31, Northern Ireland Building Regulations will require a carbon monoxide detector or alarm “in the room where the appliance is located. However, if the combustion appliance is installed in a room or space not normally used e.g. a boiler room/cupboard, the detector/alarm should be located just outside the room or space”.

Carbon monoxide is produced when fuels such as gas, oil, charcoal, coal and wood do not burn completely.

The most common cause of this is when an appliance, such as a boiler or cooker, is installed incorrectly or poorly maintained. Carbon monoxide can also build up when flues, chimneys or vents are blocked.

The Department of Health estimates that 50 people are killed by carbon monoxide poisoning, and at least 4,000 are treated in hospital, in the UK each year.

However, the Carbon Monoxide – Be Alarmed! group says that figure is likely to be much higher, as carbon monoxide poisoning is very difficult to diagnose because symptoms are often similar to common illnesses like flu and food poisoning.