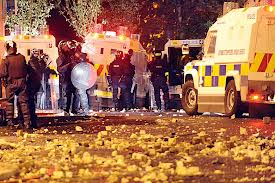 Belfast Daily understands that a number of arrests were made by a special team of officers probing the September rioting.

We have learnt that one man was arrested in the Agnes Street area while out pushing his child in a pram.

Other arrests were made in the Crumlin Road area of north Belfast over rioting at Denmark Street following a loyal order parade.

Sources said police were carrying photographs of suspects in Land Rovers as they trawled north and west Belfast looking for suspects.

“This is a major operation. Quite a number of riot suspects have been identified from video and photographic footage.

“One guy was arrested as he walked along Agnes Street while pushing his child in his pram. They took him away along with the child.”

The 31-year-old was been charged with riotous assembly, attempted grievous bodily harm with intent and possessing an offensive weapon in a public place.

The charges are in connection with disorder in Denmark St on September 2.

He is expected to appear before Belfast Magistrates Court on Friday, November 23.

More than 60 PSNI officers were injured during three consecutive nights of violence on streets close to Carlisle Circus.

To date, police investigating the riots have made 43 arrests.

Nine of those arrested have been released on police bail, and one person has been released pending a report to the Public Prosecution Service.