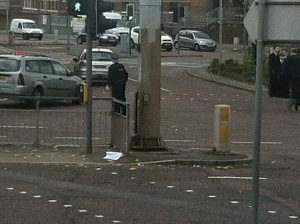 We reported that two armoured PSNI Mitsubishi jeeps and up to a dozen cops kept watch over St Malachy’s pupils as they walked to a service close to Belfast City Centre.

Last night, after hearing about our story and the reaction of local loyalists, DUP North Belfast MP Nigel Dodds said: “I will be raising these matter at the earliest at PSNI headquarters. I will need to get some answers to this.”

The pupils were heading from their school on Belfast’s Antrim to St Patrick’s Chapel in Donegall Street for a feast day Mass for St Malachy two days before an Orange Order march in the area.

Just after 10.30 am, the pupils, who were also acccompanied by teachers, walked to the flashpoint Carlisle Circus which had been the centre of trouble last month involving loyalist rioters.

An armoured PSNI Mitsubishi Shogun, with its blue lights flashing, accompanied the pupils on the half mile route from the school gates to the chapel.

A PSNI officer on foot patrol walked behind the last group of pupils heading to the 11 am service.

As they approached the lights at the junction of Clifton Street and Donegall Street, a second Mitsubishi Shogun was positioned across the road while a PSNI officer directed traffic to allow the pupils to cros the busy junction.

One local watching said: “That is the first time I have seen the police give the pupils a guard to the chapel for the St Malachy’s Feast Day.

“It just shows the tension that is in the air at the moment that pupils can’t walk to Mass without getting a police escort.”

However, Protestants and loyalists living close to Carlisle Circus were furious at what they called a “total waste of police resources”.

Belfast Daily was swamped last night and this morning with messages of complaint about the police guard.

A Protestant father-of-three described the police gun guard for the pupils as a “waste of resources”.

“Why did St Malachy’s pupils need an escort today? Where was the threat?

“And who sanctioned this because it appears to me to be pathetic and a waste of resources.

“My son can’t even get a bus safely to school. This is an absolute scandal,” he added.

A woman posted saying: “I am totally disgusted that the Chief Constable allowed money from his budget to fund these unnecessary resources.

“Would he not be better protecting the Protestant people that are living on peace lines who are constantly getting intimidated by nationalist violence.

“Wake up and start serving all the people of the country not just nationalists and bowing down to Sinn Fein/IRA.”

‘Ally Hamilton’ wrote: “This has never happened before. I have lived here all my life and I have never seen police escorting the pupils to their church.

“The Chief Constable Matt Baggott needs to come out and explain to the Protestant people why there was such a waste of police resources.

“Why now Chief Constable? Is it because of the Orange Order church parade on Sunday.

“Sinn Fein are no doubt stirring the pot here to keep the situation inflamed. They are afraid that if they don’t keep on top of the parading issue they will lose ground to dissidents.”

The ‘Price of Peace’ penned: “Is this the price we have to pay?

“Where is the respect and shared space? That is all the Protestant people want. From what I see Sinn Fein/IRA have got a new arm to their war machine. The PSNI.”

Tensions have been high in the flashpoint area since the summer when the Shankill Road-based Young Conway Volunteers walked round in circles outside St Patrick’s Chapel playing loyalist tunes.

It provoked outrage from parishoners and residents and led to a formal apology from the Royal Black Perceptory to parish priest Fr Michael Sheehan about the band’s behaviour.

Tomorrow, a further heavy police presence is expected as the Grand Orange Lodge of Ireland goes on parade to celebrate the anniversary of the Protestant Reformation.

Forty loyalist bands and around 400 Orangemen will walk from Florence Place, down Clifton Street and into Donegall Street past the Catholic Church at around 2pm.

However, in the light of previous trouble, the Parades Commission has imposed a number of restrictions on marchers on the outward and homeward journeys.

* a single drum beat (or no music) from the Westlink to 18 Clifton Street;

* no supporters from the Westlink to Clifton Street and the same from Donegall Street to Royal Avenue.

A counter demonstration by up to 100 members of the Carrickhill Concerned Residents Group (CCRG) will take place on both the outward and return journeys of the Orange Order parade.

The Parades Commission, who have imposed restrictions on the CCRG, said it was “disappointed” that no talks took place between the Orange Order and the residents group before it made its determination.