REVEALED: THE ULSTER FEMALE MEDIC KILLED BY ‘ALLIES’ IN AGHANISTAN 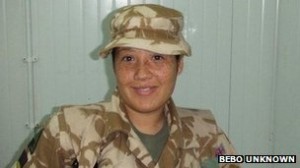 Corporal Channing Day who was killed in Afghanistan yesterday

THIS is the female medic soldier killed in Afghanistan yesterday may been the victim of a ‘green on blue’ incident.

Channing Day, 25, from Comber, Co Down, died in the Helmand province region suggest was killed by Afghan allies – a so-called ‘green on blue’.

The former Army cadet had been in the British Army for the past seven years was with 3 Medic Corp based in Ripon, Yorkshire.

A friend of the family said: “It is all she ever lived for. She was so stunningly beautiful nobody every thought she would join the regular army.

“It is very sad. She had her whole life ahead.”

The Ministry of Defence said that the two British troops were killed by an “insurgent attack”.

However, this has now been cast in doubt with international news agencies claiming the pair were killed by Afghan allies in the Nahr-e Sarag district.

It is understood that the soldier from 3 Medical Regiment is a member of the Territorial Army from Northern Ireland. Both families have been informed.

DUP assembly member Michelle McIlveen tweeted she was “saddened to hear of the death of the brave young female soldier” from Northern Ireland.

The Ulster Unionist Party tweeted: “Deepest sympathies to family & friends of the young female medic and her Royal Marine colleague”.

Major Martin Creighton, spokesman in Kabul for Nato’s International Security Assistance Force (Isaf), outlined what was known about the incident.

He said: “Initial reports, and current operational reports, indicate that this was an insurgent attack in which the British soldier and Royal Marine were killed, but we are aware that there are other interpretations of what happened and Isaf officials are currently working to determine what exactly did happen.”

Maj Laurence Roche, spokesman for Task Force Helmand, said: “I am extremely sorry to announce the deaths of a Royal Marine from 40 Commando and a soldier from 3 Medical Regiment serving with Task Force Helmand.

“This is dreadful news for all of us serving in Afghanistan. Our sincere condolences go to their families, friends and colleagues at this time of grief.”