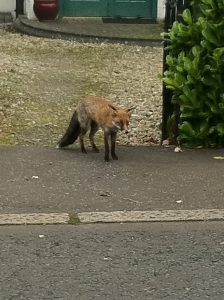 Fox cub on the loose in leafy south Belfast

PARENTS are on the lookout after a fox cub was spotted in leafty south Belfast this afternoon.

These pictures were taken by a man walking his dog in the Knockbreda area of south Belfast this afternoon and sent to the Belfast Daily.

John Gallagher told us: “My dog Barney stopped to lift his leg at a telegraph pole and the next minute I turned round I saw what looked like a fox.

“In fact, I had to do a double take. I thought: ‘That can’t be a fox, can it?’ The more I looked at it the more I realised it was a fox with the long tail and pointy ears.”

He said the fox cub looked like it had a slight limp.

“It didn’t look in the best of health. Its coat on the right hind leg seemed to be bad with mange.

“The next thing a young cat appeared and took up a position under a car. The fox cub saw it and made off in the direction of the back garden of a house – with the cat on its tail, slinking slowly behind it.”

Mr Gallagher added: “I have seen foxes before but never one that up close, and certainly not in the Knockbreda/Rosetta areas. 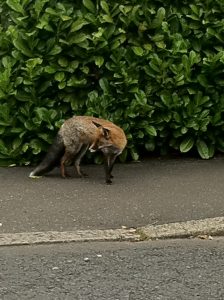 An alert fox cub on the loose in leafy south Belfast

“I was probably only 12 ft at the most from the fox. It just stood and looked at me and Barney and then scarpered once the cat came along.”

Two years ago, Lola and Isabella Koupparis were mauled as they slept in their cots at home in London.

The little girls suffered arm wounds and one sustained facial injuries after the incident, which happened at the family’s home in Homerton, east London, after the animal walked through an open patio door.