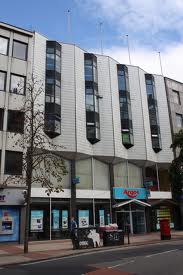 Argos store in Royal Avenue has already shut its doors

CATALOGUE giant Argos is expected to close three Northern Ireland stores as it hauls itself into the digital era.

It has already closed its Royal Avenue branch in Belfast City Centre after an overhaul of its trading practices in a bid to compete with the rise in online shoppers.

The company still has two in the city centre – one off Victoria Square and one on the first floor of Castlecourt.

Home Retail Group, which owns Argos, announced today that it is planning to close or relocate at least 75 of the catalogue retailer’s stores over the next five years.

It is part of the company’s plans to change Argos into a digitally-led retailer instead of being predominantly catalogue-led.

It plans to move its stores onto shorter leases to make relocation easier.

Argos has more than 700 stores in the UK and Republic of Ireland.

It expects 10 store closures in the current financial year and no openings.

Following a six-month review of the Argos business, it has decided to invest in developing a bigger range with universal appeal and a stronger online presence.

Among the plans for repositioning Argos as a digital retailer will be upgrading its computer systems to “collect customer data on a large scale”.

The stores will be focused on pick-up and customer services, with computers instead of catalogues for ordering and wi-fi to allow customers to order from their smartphones in-store.

The first digital catalogue will be launched before Christmas, with trials of smaller printed catalogues, offering an edited selection of products and pointing customers towards the website for the full range.

The announcement came with the release of Home Retail Group’s six months results. Pre-tax profits for the six months to the start of September came in at £51.1m, up 74% from the comparable period last year.

But that figure was flattered by an exceptional £35m gain from the retailer reducing its future liabilities by closing its final salary pension scheme. Stripping out that gain and other one-off items, profits were down 37% to £17.9m.

Home Retail Group also owns Homebase and Habitat. It bought the rights to the Habitat brand, as well as three of its stores, in June 2011.

“Market conditions remain fragile and hence we will continue to plan cautiously, however we are in good operational shape as we approach our peak trading period,” said chief executive Terry Duddy.