THE BRITISH Government is refusing to back a campaign by families who lost relaties to  IRA atrocities seeking compensation from the new Libyan regime.

And in a blunt message to those killed by Libyan guns, bullets and explosives, they have been told: You are on your own.

Prime Minister David Cameron’s position on the compensation battle was laid bare in the House of Lords today to an Ulster peer.

The Prime Minister’s representative in the House of Lords, Lord Wallace of Saltaire replied: “A key priority for the British Government’s engagement with the new Libya is promoting broad and lasting reconciliation between Libya and those UK communities directly affected by Gaddafi’s support of terrorism.

“We believe that compensation claims are best pursued directly with the Libyan Government through private campaigns.”

It is a body blow to campaigners who had hoped the British Government would row in behind them to seek damages for Libya’s support for the IRA.

The bombshell news comes as three men plan to travel to Libya in the coming months to press home their message.

Willie Frazer, John Murray and Jonathan Ganesh hope to to interview former regime member Abdullah al-Senussi, who they believe was a key player in the late tyrant’s efforts to fuel the conflict in Northern Ireland.

After Gaddafi was deposed, Mr al-Senussi was brought back to Libya to stand trial for his involvement with the previous government, in which he was reportedly the head of intelligence.

Now he looks set to face some of the victims of Gaddafi’s gun-running programme too.

Willie Frazer: “This is a man who can give us answers.

“He skipped the country – he’s only been extradited back last month. We’re going there to get information from him.

Willie Frazer to travel to Libya before Christma

“At the end of he day, if he can tell us all to do with contacts with the IRA, who was trained, who set up arms deals, this will be major.”

Asked if he believes Mr al-Senussi will be willing to help, he said: “We’ll have to take everything, cross-reference it and check it but certainly he’s in a position to do it.”

Just before the Gaddafi regime faced the  uprising which toppled it, the dictator had agreed a compensation package with IRA victims to compensate for some of the suffering his government had helped cause by shipping arms to the organisation.

Mr Frazer said that the deal is worth several million to each of the 158 victims – although he purposely did not include himself in the writ.

This deal is to be upheld by the new regime in Tripoli, but Mr Frazer added: “As far as we’re concerned this is more important to us than the financial package. It’ll bring closure. It’ll bring justice.

“We’d like to try and get out before Christmas if possible. To be truthful, what’s holding us up is financial.”

He estimated that the trip would cost around £4,000 and said they will probably bring a fourth traveller along for logistical support.

He said. “People have said with the like of us that no matter what happens we’ll never move on. This is our justice. This is how we’ll get closure.” 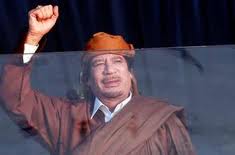 Gadaffi had a long support for the IRA

The Provisional IRA had a long association with Colonel Gadaffi’s regime going back more than 30 years.

In the 1960s the Provisional IRA was badly armed, relying on old weapons, some dating back to World War II.

Gaddafi, who took over Libya in a 1969 coup, saw the IRA as a comrade-in-arms fighting British imperialism and he was partly responsible for providing it with more modern weaponry.

The first proven connection with Libya was discovered in 1973 when the Irish Navy boarded a ship called the Claudia, off the Irish coast and found five tonnes of weaponry supplied by Libya.

Links between Gaddafi and the IRA re-emerged in 1986 after Gaddafi’s adopted daughter was killed along with more than 100 other people by US bombing raids launched from UK bases.

The Libyan leader has said he resumed contact with the IRA in the aftermath of those air raids.

A year later, French authorities stopped a ship, the Eksund, which was on its way to Northern Ireland carrying around 1,000 AK-47 machine guns, more than 50 ground-to-air missiles and two tonnes of Semtex.

It is believed that other shipments of arms reached Ireland before the Eskund was apprehended.

Attacks carried out with Libyan Semtex included the Enniskillen bomb in 1987, the Ballygawley bus bombing in 1988 and about 250 other booby-trap bombings.

Gaddafi’s involvement in the 1988 bombing of Pan Am flight 103 over Lockerbie finally led to his being ostracised and sanctions being imposed by the United Nations.

In 2003, spooked by the US response to the 11 September attacks and the invasion of Iraq, and encouraged by Prime Minister Tony Blair, Gaddafi sought rapprochement by admitting responsibility for Lockerbie and abandoning his quest to develop weapons of

The families of the 180 US victims of the Lockerbie bombing received $1.3bn (£1bn) in total as part of a deal between the US and Libya.

The UN Security Council voted to completely lift sanctions in 2003, but the DUP’s Ian Paisley Jr argued against this because of the lack of compensation for IRA victims.

As part of the negotiations to lift sanctions, Libyan officials provided information about millions of pounds and 120 tonnes of weaponry which they had given the IRA.

However, the UK government has never secured a compensation deal from Libya for victims of IRA attacks.

During a meeting with Gaddafi in 2009, then Prime Minister Gordon Brown declined to put any formal pressure on Libya for compensation.

Mr Brown told a victims’ lawyer at the time that it was not “appropriate” to discuss the claims.

In a letter to lawyer Jason McCue in September 2008, Mr Brown told him that Libya was now an “essential partner” in the fight against terrorism and it was in the UK’s interest for that co-operation to continue.

Mr McCue has been lobbying the UK to raise the matter of compensation at the highest levels of the Libyan government.

More than 100 UK IRA victims have been excluded from out-of-court deals agreed by Libya with three American victims of IRA atrocities.

An Assembly motion in 2009 which called for compensation from Libya for IRA victims was backed by all parties, except Sinn Fein.

Sinn Fein President Gerry Adams said at the time that he supported the right to seek compensation, but said the motion was “unfair and partisan”.

In September 2009, it was revealed that PSNI officers were sent to Libya to help train its police.

Police said a chief inspector/temporary superintendent had spent a number of days in Libya in November 2008 to assess training needs.

Based on his recommendations, an inspector was part of a tactical command course between 12 January and 2 February 2009.

The decision was met with shock and criticism by unionist politicians.

Many RUC officers killed or injured during the Troubles were victims of Libyan weapons.