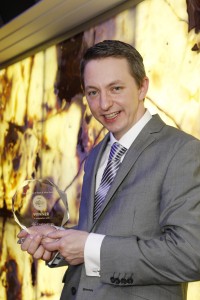 IT WAS a five star performance by Peter McAlister to be crowned UK Restaurant Manager of the Year.

The restaurant manager of the Culloen Estate & Spa in Belfast beat off stiff competition to take the coveted title.

The news has just been announced within the past hour and already colleagues in the Hastings Group have been tweeting him messages of congratulations.

Peter picked up the title following the final yesterday at the Westbury Mayfair hotel, London.

The runner-up, announced at an Awards Dinner sponsored by Champagne Lanson and Boutinot Wines, was Paul Taylor, general manager of TGI Friday’s Wembley.

The competition, organised by the Academy of Food & Wine Service (AFWS), saw four restaurant managers compete in the final.

This involved a customer service scenario, a staff management task and an all-important Dragon’s Den-style presentation in which the competitors pitched a business plan for a new restaurant concept to a panel of potential investors.

During the tough competition each of the four finalists were quizzed on their food and wine knowledge, business acumen, management ability and customer service skills.

Chairman of the judges, former winner Peter Avis, restaurant manager at Babylon, Roof Gardens and chairman of the AFWS Guild of Restaurant Service, said McAlister was a clear winner.

“Peter didn’t put a foot wrong. In the Dragon’s Den he presented well and with a real passion, conveying the information in an interesting and informed way. He sold us with the concept verbally and impressed us with his research and attention to detail.”

John Croft, AFWS executive director said: “Peter McAlister was extremely professional as well as having a warm personality and good management skills. The judges were unanimous in awarding him the title. He will be a great ambassador for the industry.”

Mr McAlister, 31, from Belfast, has worked at the Culloden Estate & Spa for 15 years, previously working for Malmaison Hotels. This was the third year he had got through to the final of the competition. On receiving the award, he said he was “delighted and absolutely shocked”.

“I have loved every minute of the competition, it has been so exciting. It has been a big team effort – I’ve had a lot of support from my colleagues and my general manager. Without them I wouldn’t have been here and I couldn’t have won.”

As part of his prize McAlister receives a stage in some of Daniel Boulud’s Dinex Group of restaurants in New York, staying at the trendy, boutique MAve Hotel in the FlatIron district, gaining a unique insight into the running of various departments. The Culloden Estate & Spa receives a year’s subscription to the Livebookings reservation system.

Judge Stephen Motion, head of business development at leading sponsor Livebookings said: “It‘s a pleasure to be involved in such a prestigious award with candidates coming from a range of establishments. The standard was very high but we had a very strong winner in Peter, who had clearly done his research in all aspects of the competition.”