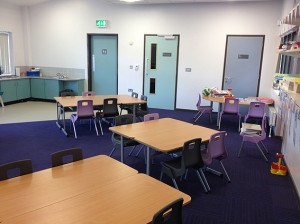 A classroom in the new Scoil na Fuiseoige which has opened following a £1.68 million investment

Scoil na Fuiseoige, on the outskirts of west Belfast, had been operating out of mobile classrooms on the site.

The Department of Education funding has come at the end of a campaign for new facilities.

“My Department has invested more than £1.68million in the new facilities,” said Mr O’Dowd.

“This will enable the school to move from strength to strength as it approaches its third decade providing education through the medium of Irish to young people in the local area”.

There are 22 Gaelscoils in Northern Ireland, along with 11 Irish medium schoolss and two Independent Irish-medium Schools.

“Irish-medium education is flourishing right across the north of Ireland and is more popular than ever,” said the Stormont Minister.

“I am committed to ensuring that parents here continue to have the choice to educate their children in what is our native language.

“Children who are bilingual from a young age have a strong foundation for future learning in any subject, and often pick up other languages with ease.”

Scoil na Fuiseoige has an age range of 4 – 11 with around 76 boys and 74 girls and five full-time staff.

Parent Anne McDonnell, from nearby Twinbook, said the facilities were ‘badly needed’ and are ‘fantastic’.

“It is great to have a choice of school and it is grea to be able to send my children to the school to learn the native language.

Her son, aged three, goes to the Naoiscoil at Fuiseoige, and her daughter Colleen is in primary four.

Colleen told insideireland.ie that she was excited about the new school.

Colleen said she was happy to learn Irish and uses both languages in the playground. She said Irish is ‘not too hard’ and her teachers help them if they are not sure.

The new school has state of the art facilities including a gym and a 3G pitch.

Before, the children had to leave the grounds to go to Brooke accross the road to do PE.

“The classrooms are bigger, and we have new tables with plenty of room to put my stuff,” said Colleen.

“The best are the computers which we use to do our work and sometimes play games”.

Colleen says she likes both languages and has also started to learn English.