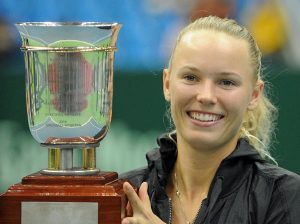 HE says he loves nothing better than to follow his girlfriend on the world tennis tour.

And on Saturday, Rory McIlroy was on hand to watch from the rafters as his girlfirend Caroline Wozniacki clinch her 20 th ladies tennis title in Russia.

The Holywood golfing star is never too far away from Caroline’s side when he is on the tennis tour.

The 23-year-old, who is close to being snapped up by sportswear giants Nike in a reported £156 million sponsorship deal when his current deal with Titleist and Footjoy runs out at the end of the year, follows Caroline as much as possible when he is not on the golf course.

Before the final started, he tweeted on his Twitter account: “30,000 ft up and watching Caroline in the final in Moscow!”

SO IN LOVE…Rory Mcilroy and his girlfriend Caroline Wozniacki

And after her three sets win, Rory tweeted to his 1.3 million followers on Twitter: “20th LTA (Ladies Tennis Association) to Caroline.

Yesterday, the jet set golfer, who helped Europe beat the USA in the Ryder Cup last month in their own back yard, told of how much he enjoyed following Caroline on the tennis tour.

“My time spent with her is my time off. My time away.”

He added: “If I have time, I’ll travel wherever in the world she is, just to see her. That’s what I want to do. That’s what makes me so happy.

“Obviously it’s very satisfying to win majors and important tournaments but deep down, what makes me really happy is my life outside of golf and how that is at the moment.

“And that, in itself, enables me to play great golf because everything is sort of in balance,” said the golfing genius.

Rory now has two major titles under his belt and is chasing his arch rival Tiger Woods to become the best golfer ever.