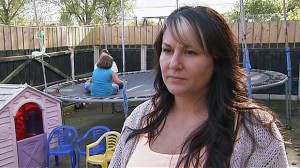 A CATHOLIC MUM is quitting her home after it was targeted in an arson attack – the fourth sectarian attack on the family in recent weeks.

Janette Nelson is moving out to protect herself and her children from a possible death.

The PSNI said they are treating the incident at Lenamore Park in Newtownards on Saturday evening as a hate crime.

Single mum Janette Nelson lives in the home with her three children and was alone at the time of the attack.

Flammable liquid was poured through the letter box of the house and set alight at around 7.20pm before the owner managed to put it out. Luckily, no one was injured in the sectarian attack.

However, minor scorch damage was caused to the door.

Alliance Strangford MLA Kieran McCarthy condemned those behind the fourth attack on the family.

He said: “I am disgusted that this family has been targeted for the fourth time. I cannot comprehend why somebody would want to target a family in this way.

“If anybody knows any information about these attacks then I would urge them to contact the Police.

“The Police need to urgently apprehend the people responsible for these attacks.” 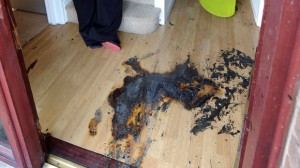 The home was last targeted just over a week ago. Ms Nelson and her three children were in the house when the arson attack took place.

She managed to pass them through an upstairs window to a neighbour who had climbed up onto an adjoining roof of their burning house.

They were left badly shaken but not hurt.

A 32-year-old woman arrested on suspicion of intimidation in relation to that incident was released on police bail.

Ian Cox of the East End Community Association in Ards said the family were “totally sickened” by what had happened.

“They are asking questions about what is going on. We would ask anybody to come forward to give the PSNI some sort of lead,” he said.

“This should not be happening. The whole community is in shock.”

Following a previous incident earlier this month, Janette Nelson said she was not going to be forced out.

She said: “I’m not going to be scared into moving out because I love living here and as I say I’ve never had any bother or problems and the kids love it,” she continued.

“This is the only place I’ve ever felt that’s really mine so I don’t want to move at all.”

However, following the third attack on her home last week, in which flammable liquid was put through the letter box, Janette said would now have to think about moving.

Ms Nelson said she was “terrified” as the thick, black smoke filled the property and said that if her smoke alarm hadn’t worked, her and her children could have been killed.

“I was absolutely terrified and so were my children,” she said.

“I still am terrified. If it hadn’t been for the smoke alarm myself and my children wouldn’t be here now because the black smoke was coming up the stairs and I was choking.”

Janette described waking up her young kids and bringing them to the bathroom at the back of the house, before phoning police and a neighbour for help.

“I rang my neighbour William who lives next door and he came and climbed up the fence and helped my children out before the big black smoke came.

“I was in bed and just jumped up. When I came out to the landing I felt this immense heat coming up the stairs and saw the front door was all in flames.

“I lifted my son, who is only two, and a phone. Then I went into the girls’ room. I got them into the bathroom and called the police.

“I couldn’t get out the window but minutes later the firefighters were there and I just remember being taken out and not much after that.”

Fire crews from Newtownards and Bangor were called to the scene at around 2am to deal with the blaze, which they said was started deliberately

Now after a fourth attack, Ms Nelson is moving her and family out of their Lenamore Park home for their own safety.