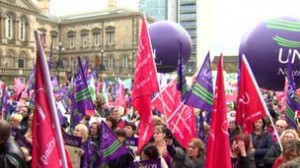 Up to 1,000 people take to the streets of Belfast to oppose publicspending cuts

TRADE UNION workers were told yesterday that poor people “were living on the edge of an abyss” because of Lib Dem/Tory public spending cuts.

Over 1,000 people took part in the anti-austerity rally in Belfast to show their opposition to Westminster cuts to public spending and draconian welfare reforms.

The rally was organised by the Northern Ireland Committee of the Irish Congress of Trade Unions (ICTU).

Health workers, civil servants, teachers and representatives of the Fire Service were among those taking part.

The government has argued the cuts are necessary to tackle the deficit.

The rally began with a march past City Hall to Custom House Square. The event was planned to coincide with protests in Glasgow and London.

The organisers said the protest was not just about sending a message to the coalition government in Westminster, it was also about decisions taken at Stormont.

The unions want child poverty, job cuts, welfare reform and corporation tax to be tackled. They said they hoped local ministers were listening.

Peter Bunting, Assistant Secretary of the ICTU, said the government needs to raise additional funding by targeting the rich and well off – not the poor.

“We have people here today, general community people, who are living on the edge – the edge of an abyss which they are going to tumble into if the welfare bills go ahead, the welfare cuts go ahead.”

He added that what is needed is an “economic stimulus” which results in real jobs being available for those coming off welfare or unemployment benefit.

“That’s not what is happening in Northern Ireland,” he said.

Pamela Dooley, UNISON senior official and Chair of the Northern Committee of ICTU, said that it is time to confront the government with “stark realities from which they cannot escape.”

“Realities on which the people demand immediate and direct action.

“Working class people in our society are dying prematurely. The unemployed, and in particular those suffering long-term unemployment are dying quicker than anyone else in this society.”

She continued: “As our suicide rates rise low paid workers and unemployed workers, particularly working class men, are taking their own lives at a faster rate than any other group in our society.

“The Government response is to cut low paid public sector jobs, fail to create, or locate, decent jobs in our areas of greatest disadvantage and once again to attack the benefits system supporting our people.”

In a statement before the march, the ITCU said the rally would “send a message to our MLAs and our MPs from all political parties that we the people are firmly opposed to the failed policy of austerity which destroys lives and futures”.

Ten days ago, the Stormont Assembly voted in favour of the Welfare Reform Bill, supporting the biggest shake up of social security benefits in decades.

The changes will impact on thousands of people in Northern Ireland, affecting those in receipt of payments such as disability living allowance, housing benefit and employment support.

Over 250,000 took part in a similar rally through the streets of London. Another march took place in Edinburgh.