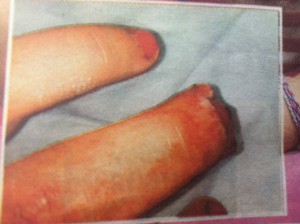 EXCLUSIVE: A young girl has been left traumatised after losing part of her finger in a horror playground accident.

And her shocked mum has been left haunted by her daughter’s hysterical screams as she sobbingly told her: Help me mummy. My finger is trapped in a gate.

It is the second time in just a few months that a child has been injured during a playground acccident on the eastern outskirts of Belfast.

And it has brought into sharp focus for  worried parents the dangers that lurk in parks which have been designed to be safe havens for children.

The latest playground accident happened last Sunday when Demi-Leigh Allen was playing with her brothers and cousins.

But even the valiant efforts of passersbys who packed the severed top of finger in ice failed to help safe it under the surgeon’s knife.

Now mum of six Jacqui Allenm, who only lives 300 yards from the park, has called for urgent accident at the £80,000 recently playground before another child is even more seriously hurt.

Said Jacqui: “I was at home when Demi-Leigh rang me on her mobile phone just to say that she, her brother and cousins were up in the park.

“Then suddenly out of the blue she started screaming down the phone to me to help her. 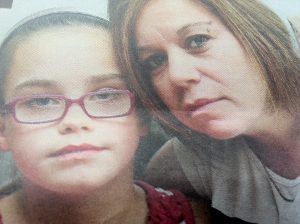 DEmi-Leigh and her mum Jacqui Allen.

“Then the next thing was I heard a man’s voice and then the phone suddenly went dead.

“I immediately ran to the front door to see if I could see her running down towards the house.

“Instead a friend of mine appeared at the archway at the top of The Green.

“She started shouting down to me: ‘Get up here now. Your daughter’s had an accident!”

“So I ran up the hill and through the archway to the playground.”

When Jacqui reached the park she discoverd that Demi-Leigh had already been carried into Redburn Community Centre, Holywood where a children’s Sunday School meeting was being held.

“Apparently a Sunday school teacher had run out and saw Demi-Leigh lying there with blood everywhere and carried her inside.

“She was sitting on her sister’s knee, shaking and her finger wrapped in tissues.

“One the other Sunday school teachers had picked up her finger tip nail and nail and carefully placed them on top of a box of ice with a plastic bag around it.

“I asked her what happened and said she was just talking to me on her phone at the gate with her right hand against the part where it opens and closes.

“She didn’t know what happened but then all of a sudden she felt really dizzy and fell down to see the top her finger and her nail on the ground.

It is now believed that the spring-loaded gate had been pushed open by a person going through only for it to snap behind on Demi-Leigh’s finger.

The ten-year-old was taken to hospital a paramedic team where she was put on morphine and taken into theatre.

But Jacqui got the worst nes imaginable for a parent.

“I asked the anaethetist if her finger tip and nail could be saved but he said they couldn’t because they were too badly damaged.”

The horrific incident has left Demi-Leight traumatised but is receiving all the help and support from her family.

Her mum is now going to lead the charge to have the gate changed.

“My main concern is that the gate is changed for safety reasons and for all the kids who go in there to play.

“A park is meant to be a safe place for children. It is too late for Demi-Leigh and she will have to live with this for the rest of her life.

North Down Borough Council has now launched an investigation into the incident.

“Council officers became aware of this incident at the playground on Monday morning.

“A thorough investigation is being carried out by our technical experts.

“The playground will remain closed until the investigation is complete.”