IF DEL BOY was watching from the Solitude terraces yesterday he would have clasped his hands, chomped on his big cigar, and chortled: Nice one, Boycey!

Liam Boyce was the difference for Cliftonville who scoreD goals either side of the half to put the Reds top of the table with a four nil win over Dungannon Swifts.

His brace along with goals by Gormley and Donnelly put the Reds on top of the Danske Bank Irish League this weekend, bringing the team’s goal tally this season already to 26.

And Ballinamallard dropped to second after Crusaders torpedoed their rich vein of form with two second half cracking goals from Paul Heatley.

The two-nil defeat ended ‘Mallards’s six straight wins on the bounce who had been the  team of the season so far. 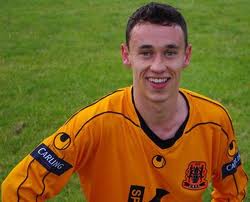 Coleraine, who play Linfield at the Showgrounds tomorrow night (7.45pm kick off Live On Sky), are in fourth on 21 points with a game in hand.

It means that Cliftonville go three clear points ahead of Mallard in the race for the Danske title.

There was even less luck for Lisburn Distillery who were thrashed four-nil by Ballymena Utd and remain second from bottom on six points.

Ballymena’s win means they leap frog Linfield in the league with a three point lead over David Jeffrey’s Belfast Blues.

And Portadown’s 71st min strike from defender Gartland means Donegal Celtic are still rooted to the bottom of the Danske Bank League on just four points without a single win in their opening 12 matches.

Glentoran’s 2-1 win at home over the Lurgan Blues has now pushed the Cock ‘n’ Hens into fifth place on 20 points with Glenavon still third from bottom on 10 points .