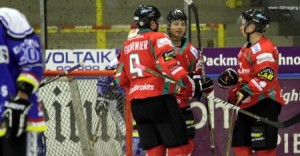 The Stena Line Belfast Giants got off to the perfect start in their opening game of the IIHF Continental Cup with an 11-1 win over the number 2 seed Ruijters Eaters Geleen.

The win sets a high standard for the other teams to follow with the second game taking place this evening with the host team Landshut Cannibals taking on the Romanian champions HSC Csikszereda.

The Giants got on the board in the opening minutes as Mark Garside netted his first goal of the season on a feed from Darryl Lloyd.

With Geleen on the back foot the Giants struck again the very next shift. This time Craig Peacock found the back of the net with Daymen Rycroft and Andrew Fournier picking up assists.

With Geleen offering little offence the Giants then struck a further 3 times in the opening period.

Noah Clarke scored a one time slapshot on the powerplay to make it 3-0, before a cross corner dump by Graeme Walton generated some offence and after some neat play in the corner Will Colbert struck from the blue line to make it 4-0.

With the period coming to a close Scott Champagne made it 5 without reply converting a pass from Noah Clarke to leave the Giants with a comfortable lead going into the first intermission.

The Giants hit some penalty trouble at the start of the second with Matt Towe and Darryl Lloyd sitting separate penalties before a bench penult for too many players presented Geleen with yet another powerplay opportunity.

The Giants defence held firm and before the long the scoreboard was turning over once more as Noah Clarke converted a breakaway to make it 6-0 with a shorthanded goal.

Andrew Fournier capitalising on a powerplay opportunity made it 7-0 as he buried a rebound in the slot on the powerplay to further extend the lead and at this point Geleen changed their netminder and Christiansen decided to mix up the line combinations managing players ice time and rewarding Gareth Roberts and Graeme Walton who were both playing a regular shift.

Soon after followed the introduction of Andrew Dickson who replaced Murphy who had only faced a handful of shots to this point in the game.

Greg Stewart added the Giants eighth goal and he streaked into the Geleen zone pulling a fantastic move on the last defenceman before rounding the netminder and firing a backhand shot into the roof of the net.

In the third period the Giants continued to create scoring chances with very little coming the other way.

Adam Keefe and Mark Garside combined with Keefe netting the Giants ninth goal, however shortly after Geleen pulled one back as a low shot found its way through a crowd to nestle in the bottom corner of the Giants goal making the score 9-1.

David Phillips then made it 10-1 and Gareth Roberts rounded off the scoring at 11-1 with his first goal of the season.

The Giants attention now switches to Saturday’s game against the host team which is expected to be a much tighter game.