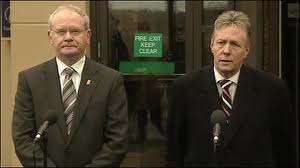 Governmemt bean counters are yet to be convinced that bringing Notthern Ireland’s corporation tax into line with the Republic’s will be a job winner for the province.

His new Northern Ireland Secretary Theresa Villiers will not be far away today as the negotiations take place in Westminster.