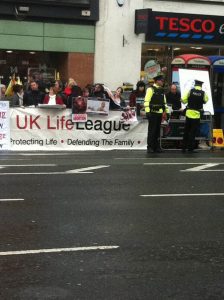 NORTHERN IRELAND’S Attorney General has called for a Stormont inquiry into the opening of Belfast’s private abortion clinic.

John Larkin QC made the call as several hundred pro-life campaigners picketed the building housing the new premises, the first of its kind in Ireland.

They gathered as the Marie Stopes clinic opened its doors at lunchtime to welcome in women seeking non-surgery abortions.

Up to 200 protesters carrying placards and banners braved the driving rain inGreat Victoria   Street penned in behind crash barriers.

Placards bore the words ‘ABORTION IS MURDER’ above pictures of bloody foetuses.

He has written to Stormont’s Justice Committee chairman Paul Givan offering his services in his capacity as the “guardian of the law’’ in Northern Ireland, not as the Attorney General.

Mr Larkin is the chief legal advisor to the Stormont Executive and in his litter he has invited the Justice Committe to investigate the operations of the Marie Stopes clinic.

He said that he could not intervene in his role as the Attorney General, however he could become involved because he is charged with minding the law in the province.

The Attorney General, a QC, said that he would be happy to give every assistance to the Committee, including questioning witnesses on their behalf.

Thelma Mitchell, 45, from Ballynahinch, Co Down, said she had travelled the 30 miles by bus to protest against Marie Stopes offering women who are pregnant up to nine weeks.

“Abortion is illegal. Every life is precious and no one has the right to kill an unborn baby,’’ said the mother-of-three.

“We believe that government should close Marie Stopes and protect the life of unborn children.

“It is a sin against God’s law to kill a child no matter how many weeks old it is. Stop this murder.’’

However, some passersby were bemused at the crowds gathering in the rain to oppose the new Marie Stopes clinic.

One man said: “Have these people nothing better to do? Have they no jobs to go?’’ 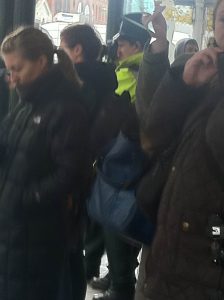 Bernie Nolan, who is starring in the Chicago musical, walked past the doors of the Grand Opera House where she treads the boards in the evening with her hood up as the rain pelted down.

However, she wouldn’t talk to waiting reporters who sheltered from the elements under the Opera House’s canopy on Great Victoria Street.

Over two dozen police, on foot, bicycle, vans and armoured cars were on hand to keep the protest peaceful.

As protestors, some wearing Scary Movie masks and carrying ‘LIFE’ banners, police discreetly took pictures from across the street of anti-abortion campaigners with a telephoto lens.

Earlier, the PSNI warned the large gathering of local, national and international media, not to photograph staff or patients going into the building which was once the Northern Ireland office of the now defunct Anglo Irish Bank.

The police said that the photographs could infringe the rights of staff and patients under Article 8 of the European Convention on Human Rights. 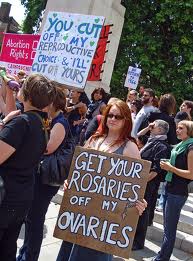 The Maries Stopes clinic, which had been planning the opening of the Belfast office for 18 months, hired its own private security guards to protect staff and patients from possible attack by protestors.

Pro-Choice campaigners, who count among their slogans as ‘Keep Your Rosaries Off Our Ovaries’

, will hold a rally tomorrow night in support of the opening of the Marie Stopes clinic.