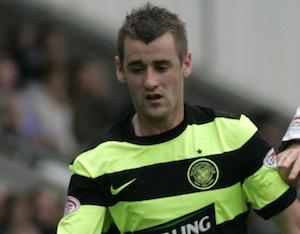 IT has to go down as one of the greatest upsets in football – and it was ONLY a draw.

Northern Ireland went to Oporto tonight and were just 11 minutes away from beating the world’s third best team – Portugal.

And it was a lead they held until the 79th minute when Helder Postiga turned the ball home.

It was a frustrating evening for the hosts with their captain Cristiano Ronaldo left disappointed on his 100th cap.

Portugal are third in the group level on seven points with Israel, while Russia are top on 12 points after the latter two won their matches on Tuesday.

The match started brightly with Portugal having the majority of the play but failing to create any real chances thanks.

The Northern Ireland defence – led by man of the match Johnny Evans – was superb all night.

It was Evans who cut out a Portuguese pass in the centre of the pitch and fed Kyle Lafferty, who did well to find Tyrone man McGinn’s run into the area.

The Aberdeen winger took one touch and then coolly lobbed Rui Patricio.

Craig Cathcart struck his own crossbar while attempting to clear a cross just before half-time – but at the break Northern Ireland led.

In the 57th minute Roy Carroll took a thundering shot from Ronaldo.

Ronaldo had his best opportunity of the game on 70 minutes as Pepe played a delightful ball down the middle for him, bypassing in one move the ranks of Northern Irish midfielders and defenders, but Aaron Hughes tracked him brilliantly and got back in the nick of time to concede the corner.

Portugal’s goal came soon after through Postiga as he found space in the Northern Irish area, turned superbly and finished low into the net.

Portugal pressed for a winner – but Northern Ireland held out – and deserved their point.

“This is as difficult a place as there is to come. We are disappointed to only come away with a point,” O’Neill said afterwards.

“Credit the players, their desire and workrate was magnificent,” he added.

“The togetherness and spirit in the squad is unquestionable. The boys all worked for each other and we soaked up the pressure well.

“Our shape was fantastic and the way we went about our job was fantastic, I thought the players maybe deserved more.

“This result will give us great confidence for the future and there is a lot more to come from this team if we continue to improve and grow.”

Niall McGinn was cuffed to score his first for Northern Ireland.

“This is a dream come true and I’m delighted to have scored my first international goal,” McGinn said.

“I just saw the keeper coming and dinked it over him. The boys were great, especially in the first half, and we can hold our heads high after this result.”