TRAP BIDS TO HOLD ON AS REPUBLIC BEAT FAROE ISLANDS 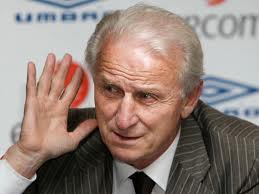 SEAMUS Coleman played a starring role as the Republic beat the Faroe Islands.

The Everton star impressed manager Giovanni Trapattoni with an assured performance at right back – but Trap may be about to quit.

Coleman was many people’s choice as Man of the Match – an honour which went to Wigan star James McCarthey in the 4-1 World Cup qualification win.

The game was scoreless at half-time.

But Marc Wilson hit a stunner in the 46th minute to give the Republic the lead and when John Walters struck with 53 minutes gone, the points looked safe.

Faroes substitute Arnbjorn Hansen reduced the deficit with a 68th-minute header, but Pol Justinussen’s own goal and an 88th-minute Darren O’Dea header from a McGeady corner completed the Irish win.

Coleman was busy all night getting up and down the wings and will surely have convinced the Italian of his ability going forward.

Coleman too was pleased with his own and his team’s performance.

“We did well even thought it was scoreless at half-time. The manager spoke to us and told us to continue to play the way we were playing.

“We got on top after we scored the first goal and things went well after that. We played some good, controlled football.

“I was pleased enough with my own performance but I was delighted that we did well as a team after last week’s poor display against Germany,” he said.

The question still remains if Trap will stay on as Ireland manager with speculation mounting over his future.

A planned press conference for tomorrow has been cancelled without explanation.