UNDER pressure DUP Minister Nelson McCausland has named a new boss to head up the publicly funded Housing Executive.

Donald Hoodless, who is currently based in London, he is expected to take up his post shortly. 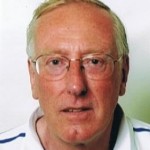 Details of a Department for Social Development review which will involve significant restructuring of the organisation are expected to be announced before the end of the year.

It is understood that a paper has been circulated to the Northern Ireland Executive at Stormont setting out the minister’s proposals for the future of the organisation.