SECRETARY OF STATE FACES GRILLING BY MPS OVER CORPORATION TAX 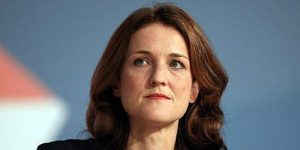 NEW Secretary of State Theresa Villiers will face a grilling later this month by MPs on corporation tax.

The Belfast Daily can reveal that she will be hauled before the Northern Ireland Affairs Select Committee in the House of Commons on Wednesday, October 31.

As well as corporation tax, she will also be grilled about Air Passenger Duty and the government’s air transport strategy for Northern Ireland.

Politicians and business people have been lobbying the Conservative government to slash the 25p in the pound corporation tax in Northern Ireland in a bid to boost jobs.

A breakfast club at last week’s Tory party conference in Manchester was told that thousands of jobs could be attracted to Northern Ireland if corporation tax was reduced.

But the Tory/Liberal Democrat coalition government are steadfastly refusing to give a commitment to  devolve tax cutting powers to the Northern Ireland Executive.

It is not the first time that the Northern Ireland Select Committee has visited the thorny subject of a corporation tax reduction for the province.

A Ministerial working group was set up in 2011 to thrash out the issue of a corporation tax reduction.

He told MPs that there was a job to be done in informing the public “about what a very modest investment this would be in the future.’’

And he also explained how the reduction would affect Northern Ireland’s annual block grant from the Treasury.

He added: “The suggested costs are that each 2.5% drop in corporation tax would cost between £60 million and £90 million.

“That is 0.5% of the block grant of £12 billion. That is a very, very modest investment. Look at the extraordinary success the Republic has had in bringing in foreign direct investment. We lost 300 jobs which could possibly have gone to Londonderry, but ended up going to Tralee, not entirely because of corporation tax.

“But when you have equally skilled and well qualified people, equally competent people who work in IT, property prices are similar, there is absolutely no doubt about it-we have had it from people in Dublin-that, quote, corporation tax was the cornerstone of their success.

“I am absolutely convinced that forNorthern Irelandthis would be a very modest investment.

“If we do not do something radical to revive the private sector, where is the wealth going to come from to build the new schools and the new hospitals that we want?

“Take Almac, who employ 2,000 people. Their chief executive said, on the record, that if Corporation Tax was reduced to the same level as theRepublicofIrelandhe would double his business and double the number of jobs.

“The impact, in those difficult estates around Craigavon, Lurgan and Portadown, of another 2,000 well-paid jobs would be very significant, not just economically, but socially and ultimately politically,’’ said Mr Paterson.