Less than 48 hours before the game, Alex Bruce and Grant McCann were added to the squad’s rising numbers in sick bay.

Alex Bruce, son of Manchester United legend Steve Bruce, was in line for his Northern Ireland debut after receiving his first call-up. 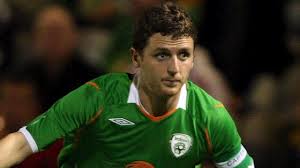 However, the Hull defender is now ruled out by a groin strain while Peterborough’s Grant McCann has picked up a knee injury.

The pair join Joe Dudgeon, Shane Ferguson, Martin Paterson and James McPake who have already pulled out of the squad.

It is also a bitter blow for Joe Dudgeon, Bruce’s Hull team-mate, who had also received his first call-up to the squad.

Chris Brunt and Jamie Ward were not named in the original squad because of injury.

O’Neill has already drafted Lee Hodson, Rory McArdle and Daniel Lafferty into his squad for the game but will not call up any further replacements.

Defender Bruce won his two Republic caps in friendlies in 2007 and 2008 so he is still eligible to represent Northern Ireland.

Bruce, the son of Hull manager Steve Bruce, was eligible for international football for Northern Ireland, the Republic of Ireland and England, where he was born.

He was called up by Northern Ireland Under-21s but opted to play for the Republic Under-21s instead.

Bruce then made his Republic senior debut against Ecuador in New York in 2007 and played against Poland a year later at Croke Park but losing his place in Giovanni Trapattoni’s squad.

It has been a poor start Northern Ireland’s World Cup campaign, losing their opening qualifier against Russia 2-0 in Moscow and being left red-faced after a 1-1 home draw against lowly Luxembourg.

And Northern Ireland’s woes couldn’t have got any worse with the announcement yesterday that Cristiano Ronaldo now being included in his country’s squad for the match in Porto tomorrow night.

Ronaldo had been doubtful after injuring himself trying to do an overhead bicycle kick during his club’s 2-2 draw with arch rivals Barcelona last Sunday.

Howeve, Real Madrid issued a statement over the weekend stating: “Cristiano Ronaldo will today join the rest of the Portugal squad.

“The Real Madrid forward was examined at his home this morning by club doctors, who have said that his injury is not serious and that he does not need to undergo more tests in a hospital.

“Real Madrid have already informed the Portuguese Football Federation that Cristiano Ronaldo will join their national team squad in Obidos.

“Once there, the player will be kept under observation and will have no problem in playing on Friday in Moscow for Portugal against Russia in the World Cup 2014 qualifier.”