MOOO-VE OVER ERMINTRUDE. BELFAST ZOO HAS A NEW BREED OF COW 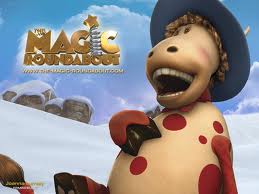 The cows, part of the world’s largest public art exhibition, will be grazing in the zoo until the end of this month.

It will allow the public one last chance to view the artwork which has been designed using the now highly-recognisable ni2012: our time, our place colours of pink, blue and yellow.

The Cow Parade art exhibition involves up to 200 cows being transformed into magnificent sculptures by local artists and community groups and Northern Ireland Tourist Board’s  herd of cows have been visiting towns and cities around Northern Ireland during the summer for one week at a time.

After appearances in Portrush, Derry~Londonderry, Bangor, Warrenpoint, Omagh, Armagh, Downpatrick, Enniskillen and the Belfast International Airport, the cows will feel right at home among the other animals at the zoo.

While the cows have been travelling over the summer they have been stopping along the way to visit some of Northern Ireland’s iconic locations and tourist attractions to have their photo taken including Carrick-a-Rede rope bridge, Marble Arch Caves, the Mournes and Slieve Gullion.
NITB’s ni2012/13 manager Siobhán McGuigan is thrilled that NITB is part of the Cow Parade. “We decided to get involved in the Cow Parade, as 2012 is such a momentous year for Northern Ireland.

“It is a great way to showcase our towns and cities and encourage people to visit the public art sculptures as they graze in different areas,” said Siobhán.
“There has been a number of cows on display throughout the cities of Derry and Belfast but the ni2012 cows were the only herd that have been moooving across Northern Ireland to be displayed in different areas and we’ve had a fantastic response from people coming out to see them,” she added.

Zoo manager, Mark Challis, is encouraging people to take this last opportunity to visit the cows.

“We are delighted that the ni2012 cows are on display at the Belfast Zoo.  It’s certainly the first time I’ve seen a yellow, blue and pink cow and they are a very welcome addition to what we have to offer.

“I hope everyone takes the chance to come visit them before they leave Northern Ireland for pastures moooo,” Mark said.