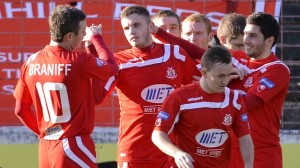 Darren Murray celebrates his penalty against Glentoran at the Oval

GLENTORAN suffered their first home defeat of the season after a late penalty to Portadown.

It means the Cock and Hens drop down to fifth place on 17 points two ahead of arch rivals Linfield.

And Ronnie McFall’s Portadown sealed their first away league win of the season to move up two places to eighth position in the table.

In the first half Stuart Elliott dragged a shot wide, while Sean Mackle, Darren Murray and Kevin Braniff were denied by fine Elliott Morris saves.

Morris was sent-off after bringing down Braniff five minutes from time and Murray fired his penalty past Jimmy Callacher from the resulting penalty.

The goal condemned the Glens to their second successive league defeat.

Eddie Patterson’s outfit drop to fifth in the Premiership table and will hope to halt their slide when they entertain Glenavon at the Oval next Saturday.