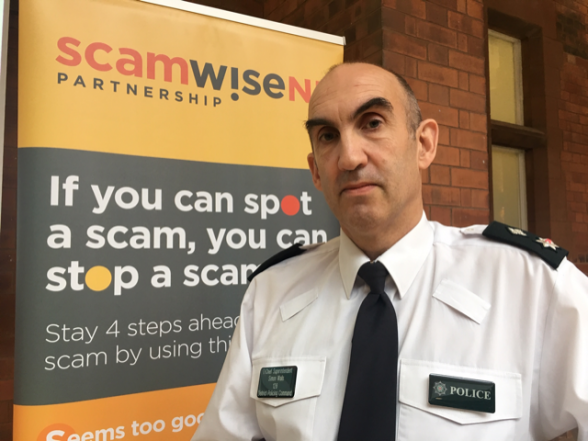 THE PSNI say it has identified an upsurge in scams where emails are being hacked and this has led to losses of excess of £769,000 during the month of July.

Chief Superintendent Simon Walls said a number of individuals and businesses were among those swindled by fraudsters in what are known as mandate frauds, where emails have been compromised or spoofed.

Chief Superintendent Walls said: “This is a huge amount of money that has been lost, and the impacts are undoubtedly significant.”

“On 1st July, it was reported email accounts of a large organisation had been compromised, resulting in €470,000 euros being transferred to three separate bank accounts. Enquiries are continuing.

“On 11th July, it was reported that a healthcare provider had received an email asking for bank account details to be changed and payments to be made accordingly. In total, £140,000 was paid to into the fraudulent account.

“On 15th July, it was reported a company’s emails were hacked and emails sent to some customers advising them of new banks details, which some customers then paid into. Almost £30,000 was paid to a scammer. Enquiries are ongoing.

“On 16 July a charitable organisation’s emails were intercepted and they transferred €59,000 into what they thought was a legitimate account, however, this was a fraudulent account and they have been scammed out of the money.  Enquiries are ongoing into this investigation.

“On 18th July, it was reported a man who had dealings with an online investment company was advised to make payment to a different bank account number. While bank details were different, the company name was the same.

“The most recent loss was reported to us on 22nd July when a business transferred around £50,000 to a supplier.

“The supplier’s bank details however had been amended by the scammers after they had hacked into one of the business’s accounts and the money was transferred to the scammers instead.”

Chief Superintendent Walls added: “Throughout July we have received numerous calls from people who have been duped out of their hard earned money.

“No matter what type of scam it is, and the different methods employed, a common element shared by scammers is their only aim is to take money from people and will go to great lengths to trick people.

“I can’t stress enough to businesses and individuals alike never to disclose personal or banking details to anyone over the phone no matter how convincing it seems to you.

“Before making payments, double check that the accounts to which the payments are being made are the correct accounts.

“Never disclose account details to any unauthorised person or allow anyone access to them via your computer.

“If you are concerned by unsolicited calls, emails or letters then please report it to Action Fraud via their website www.actionfraud.police.uk or by phoning 0300 123 2040, or call police on the non-emergency number 101.”

For further advice and information visit www.nidirect.gov.uk/scamwiseni or the ScamwiseNI Facebook page @scamwiseni