DETECTIVES have welcomed the lengthy sentences handed down to two cousins after a jury found them guilty of murdering Stephen Carson in south Belfast.

Michael Smith (40) and David Smith (35), both from West Belfast, were found guilty of the murder of the 28 year old dad in Kimberly Street  in February 2016.

Michael Smith and David Smith handed sentences of 20 years in prison without parole.

Francis Smith (42) also from West Belfast was found guilty of possessing a shotgun and ammunition in suspicious circumstances and assisting Michael and David by allowing them to store the murder weapon in his property.

He was sentenced to 7 years and 6 months, half to be served in prison and half on licence.

Passing sentence today, Judge Geoffrey Miller QC said the murder had the hallmarks of a “gangland style killing”, branding it is as “clinical and callous”.

Mr Carson was at his home in Walmer Street, Belfast with his fiancée and nine year old son when he was murdered on 25 February 2016.

Speaking about the sentencings, Detective Chief Inspector Pete McKenna said: “This was a callous, brutal murder and I welcome today’s sentencing.

“Stephen Carson was at home with his fiancée and nine year old son when three men burst in carrying a hammer and a shotgun.

“These thugs confronted the young child and Stephen’s fiancée who they sprayed with a pepper type spray.

“Stephen was in the kitchen and ran to the bathroom to phone the police.

“At this point one of these males, who I believe to be Michael Smith, fired a fatal shot through the door, hitting Stephen in the head.

“This was a premediated murder with the perpetrators leaving no forensic evidence yet these men were still put before the courts as a result of the complex, multi-faceted police investigation carried out by detectives.

“I would also like to pay tribute to Stephen’s family for their dignity, courage and unwavering commitment to seeing justice done for their loved one.

“Everyone deserves to feel safe in their home and Stephen’s murder was brutal and cold-blooded carried out by extremely dangerous men who appear to show no remorse for their actions. 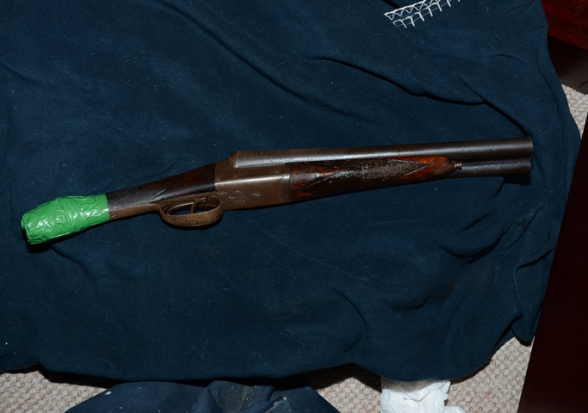 “Stephen’s son and fiancée have been left extremely traumatised by the incident and their lives will never be the same again.

“Whilst no sentence can ever take away the pain for Stephen’s family, I hope they get some comfort from knowing that his killers are behind bars.

“The community is now a safer place with these men removed from our streets.”

DCI McKenna said they were still hunting a third man over the murder. 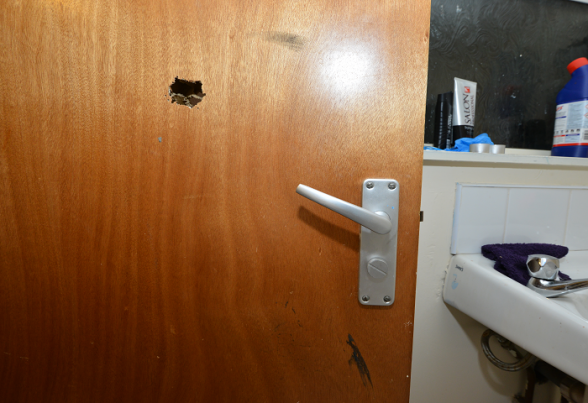 Hole in bathroom door where Stephen Carson was blasted to death