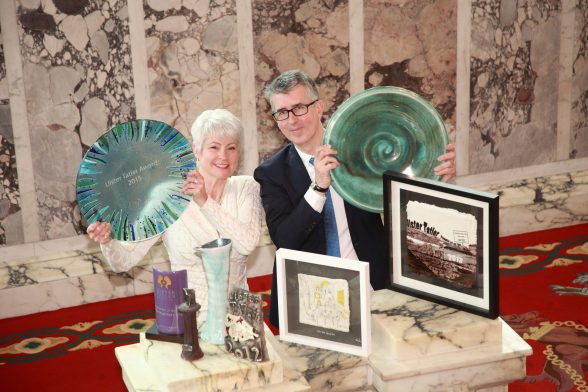 Television personality Pamela Ballantine and Ulster Tatler editor Chris Sherry celebrate the tenth annual Ulster Tatler Awards sponsored by Optilase with a variety of the prestigious trophies that have been presented to Northern Irelands best and brightest over the years.

The Ulster Tatler Awards 2017 will celebrate Northern Ireland’s best and brightest for the tenth year, and Ulster Tatler readers are being asked to vote in various categories honouring the people and businesses that have lit up the magazine’s pages in the last year.

The prestigious event, in association with Optilase Eye Clinic, will take place at Belfast City Hall on Thursday September 14 with key awards including Celebrity of the Year and Sports Person of the Year as well as the coveted Lifetime Achievement Award which has recognised some of the province’s best-loved personalities over the years such as Dame Mary Peters OBE, Brian Friel, Sir James Galway, Gloria Hunniford, Barry McGuigan and footballing legend Gerry Armstrong who was honoured at last year’s ceremony.

Members of the public can vote by visiting www.ulstertatler.com where all the categories are listed, or by picking up the latest edition of Ulster Tatler magazine and filling in the voting form inside.

Votes must be received by midnight on Sunday July 2.

Ulster Tatler editor Chris Sherry said: “We are delighted to launch the voting for the Ulster Tatler Awards 2017 and especially excited to be celebrating ten years of this fantastic event.

“The awards ceremony will once again be in the very capable hands of our host and friend Pamela Ballantine, and we are sure it will be a special night as we recognise the great achievements and talents coming out of Northern Ireland,” Chris added.

Popular TV personality and Awards host Pamela Ballantine said: “I’m honoured to be hosting my third Ulster Tatler Awards and it’s a special thrill to be there for the tenth ceremony which I’m sure will be a fantastic evening.

“I just hope that as many people as possible get voting for all the wonderful talented people in Northern Ireland who make the awards the great event they have been over the last ten years,” Pamela continued.

Optilase Eye Clinic is once again on board as title sponsor for the 2017 ceremony, continuing its involvement with the event for a fourth year.

Tracy Gilligan, CEO of Optilase said: “We are thrilled to be Title Sponsor of the Ulster Tatler Awards again, and to be part of such an important night that recognises the successful businesses and personalities in Northern Ireland.”